An intimate night with Chantel McGregor

Last time I saw Chantel's show, it was fiery, dynamic and powerful, therefore I was excited to see her doing the opposite with an acoustic night. She has chosen a lovely venue for it; the Islington seemed to be perfect. The stage with the red curtain behind, warm lights and a packed middle- sized room made it feel very intimate. Before she started, she was already around to personally welcome her fans. After a warm welcoming on stage, she started with a couple of covers, including Fleetwood Mac's 'Dreams', and she admitted being obsessed by Stevie Nicks. Indeed this song described best how the audience felt: her brilliant and clear voice on top of the wonderful guitar playing, and that full, big sound, let us dream.

Then she did an acoustic version of 'Home' from her current album. When you get that moment in a concert, people stand there, eyes and ears wide open to just listen, they are probably tantalised by a captivating performance. That's what happened when Chantel started to sing the first the line: "Leaving all I've had behind, didn't think I could do it by myself." Now she hopefully knows, that all she needs is her voice and her guitar.

What I really enjoyed, Chantel asked the audience what they would like to hear next, which showed her variety. 'Landslide' a man shouted, and spontaneously she did one of the most beautiful cover versions of that song I have ever heard. It was just moving, the control of her voice and the breathiness in it, no words! She followed this with another Stevie Nicks song. 'Gold Dust Woman', where she played the guitar with a very powerful country-style attitude.

With her original 'I'm No Good' from her second album, she proved how cool Blues can sound even as an acoustic version. Her fans, including me, sang along around that remarkable riff of the song − part of what makes her songs special, are the very well- written guitar parts.

When she did the next song. 'Beautiful Tragedy', I looked around the room and saw it was completely packed. Though we all know how Chantel rocks, she fascinates the audience with her soft side in the same way that even a HardRock fan gets goose bumps. It is the perfect chance to enjoy Chantel's beautiful voice.

Afterwards she did a 20 minute 'Question and Answer' slot, where we had the opportunity to get to know more about this lively, charming girl. She was talking about her dream to be on stage with Stevie Nicks, about her four performances with Blues/Rock titan Joe Bonamassa, about her perfection in songwriting, how much she loves roller-coasters or just making fun about herself and some normal things in life. That's what Chantel is about − a normal, fun person who is ultra-talented, which she proved when she got back to her guitar and played 'Southern Bells'. Although she said it was the first time playing this song as an acoustic version, it really rocked and sounded so full. To keep the heat up, she played 'Free Fallingl and was accompanied by the audience who sang with her.

We fell back into our dreams with the next song 'Screams' from her debut album, a very well written, intimate and emotional ballad. With her angelic voice she truly touches hearts. The cover of Bonnie Raitts 'I Can't Make You Love Me' closed a beautiful evening.

Last time I gave Chantel the title of 'Rock angel', and now that picture makes even more sense. There is so much more about her: this voice, the feeling, that sympathy makes her outstanding. She definitely can Rock and play like a Hendrix, but also sparkle with her big heart and soul on stage. 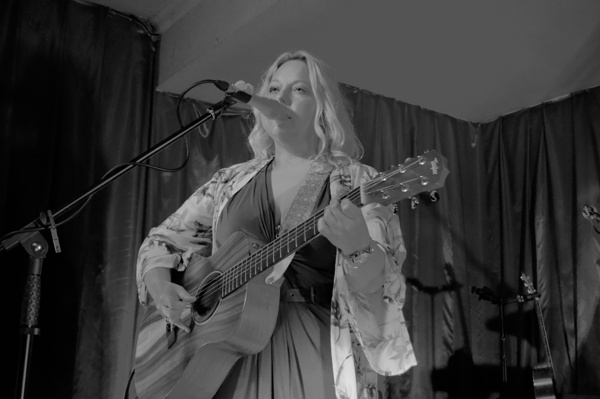