This fifth annual evening with Kip Winger at The Borderline was special for audience and artist alike, The Borderline's intimate setting giving a chance for true Kip Winger fans to get up close and personal with one of the most talented and, despite what Beavis And Butthead once suggested, coolest Rock stars on the planet. Kip Winger said this is his favourite gig of the year and, indeed, his chance to shine. He is on first name terms with some of the audience, such is the repeat following he attracts at these shows and the personal investment, in what are actually very special personal appearances and a chance to meet the man himself, make these events different from everything else available on the Rock calendar.

Kip Winger goes straight in with heavyweight songs, he has so many to choose from including 'EZ Come EZ Go', 'Can't Get Enuff', 'Deal With The Devil' and 'Who's The One'. All are genius classics delivered with his Green Jester electric acoustic guitar and a breathtaking whirl of classy Classic Rock, taking the audience by the scruff of the neck. At this point a love struck audience member shouts "Move to England!" and the main man reminds us his wife is English and the audience contains some of his relatives. Already the audience are shouting requests knowing this is a chance to hear stuff Winger the main band don't normally play and despite it being "hot as fuck" on stage tonight in this crammed venue, Kip Winger's charm and sparkling wit with the audience is not at all dimmed, he just asks for a towel and starts calling Kane Roberts to screams of delight from the audience. We get Robert's answering machine and so without delay go into 'Hungry', an opportunity for Kip Winger to show off his perfect Rock 'n' Roll voice with long notes – "Hungreeeeeeeeeeeeeeeeee" – showing he's lost none of his vocal prowess over time.

At this point there's a change of pace as he invites up an audience member Pete to sing with him on 'Miles Away'. Entirely unrehearsed, the audience member turns out to be a pretty good singer, Kip Winger setting the bar high by warning any volunteers that they can't suck. This weeds out most "have a go" fans as they are aware that, despite Rock 'n' Roll misspellings in titles of tracks, this man is a very serious about his craft. 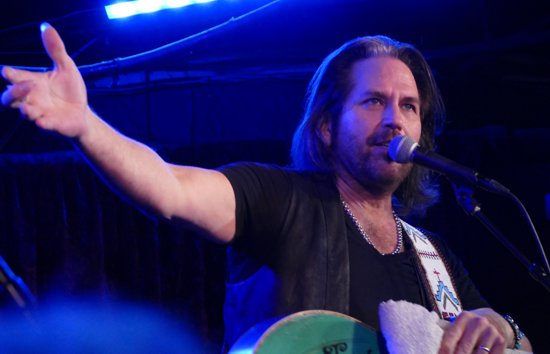 Eventually Roberts rings back, but while Kip Winger scrambles to answer and the audience hold their breath... he misses the call; this man is a master at playing the emotions of his audience. Joined by Fiona and her band (who had performed a solid although short support set with songs from across her career culminating with an emphasis on crowd favourite first album), 'Under One Condition' is up next with two vocalists, four guitars and keyboards; the talent per square inch is maximised on stage.

Following the Indian sounding 'Free', demonstrating Kip Winger's knowledge of music outside the realms of Rock, we are back to delicious Rock 'n' Roll screaming on 'Heading For A Heartbreak', illustrating that acoustic shows need not be short of passion and balls.

The crowd then go wild, shouting requests and drowning each other out in quantity and volume like a manic financial trader's circle. In fact, we get another classic 'Blind Revolution Mad', but the fever pitch translates into seriously good singing from the crowd for which Kip Winger expresses heartfelt gratitude.

Commenting in response to one request that he will never play 'Battle Stations' again, it being so hard to play, he flips a coin to decide which song to play next, the audience having shouted equally as enthusiastically for each option. Thank god we are treated to a haunting version of 'Spell I'm Under', something we would not have wanted to miss. The audience is shouting "We love you Kip!" as once again he nailed it.

The audience continue to keep up the high energy participation with singing on 'Rainbow In The Rose' and dancing during 'Down Incognito'. Kip Winger is clearly delighted with audience engagement and shouting "Show everyone else in the fuckin' world how it goes", he lets out a "yeah" which is in fact a victory war cry. Switching to the real emotional feeling of 'Madeleine' he reminds us how much depth his voice always had and still has, no loss over time here.

With the comic end of substituting 44 for 17, Kip shows off his wicked sense of humour again. His reward is wild applause and again that same persistent audience member shouting "Move to England". Anxious to please without changing the direction of his whole life, he lets us know that he will be working on another solo album soon and that Reb Beach and he will start writing soon.

In the true generous spirit of collaboration Kip Winger invites Fiona back for a cover of 'Everything You Do, You're Sexing Me'. Fiona jokes she wrote it when she still had oestrogen, but the point about all this is that it's not a faded shadow of its former self, these Kip Winger solo gigs are triumphs. Yes, he could fill out much larger venues, but the size of this venue is what makes this annual event special; it's full of the most passionate fans and every one memorable in its own right.

After the show Kip Winger graciously signs and take pictures with each fan, asking their name and making each one feel special. What marks out a true showman is audience engagement and this performer is a true gentleman to the last and disappoints no-one (well, except for the guy who wanted him as a next door neighbour, but who could blame that guy after all). Energetic and passionate, a consummate professional, a stunning show stopper and endlessly talented, Kip Winger had it all tonight. Bravo! 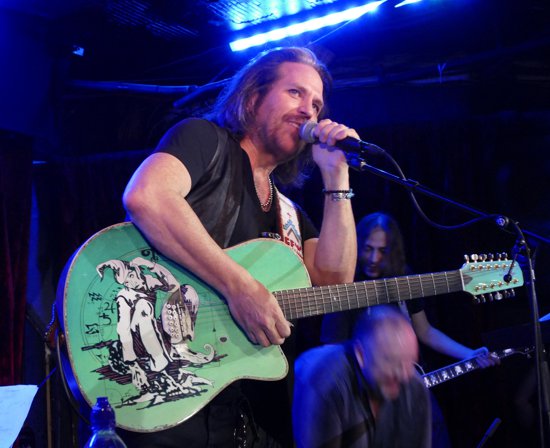