The Waterloo in Blackpool has started to attract some high-profile acts and has become (despite its modest size) a good addition to the list of venues available in the North West of England. Rock Goddess and Heavy Pettin are on a comeback trail of sorts and seeking to establish themselves once more amongst a heavily populated Rock music community. An overnight stay was decided upon and a brief fifteen-minute walk in the (very) fresh evening air, through the famous illuminations, proved a nice change to the usual unpredictable train or car journey to watch a gig.

I never got to see Heavy Pettin when they were originally active during the 1980s and I know they often divided opinion, mainly due to lead singer Hamie's unique, yet unmistakable, delivery. After seeing them open up for Angel twelve months earlier in Nottingham (and being suitably impressed) I was keen to see if further development had been made and whether there was any new material to promote. With only Hamie and guitarist Gordon Bonnar remaining from the original line-up and thirty years since the last recorded output (the American sounding 'Big Bang'), the decision to resurrect the Heavy Pettin name could have provided plenty of ammunition for those dubious about whether there was still any interest in a band who never really hit it big first time round. 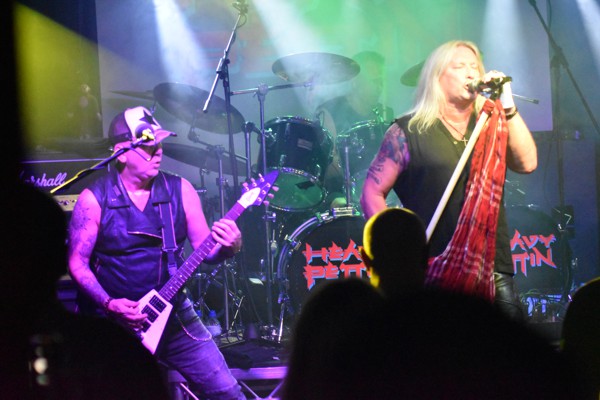 For an hour at the Waterloo it was clear that it was not merely a nostalgia trip. Opening up with a brand-new song, 'Back To You', was a bold move and a clear indication that the ball is well and truly rolling. A new album is due to be released before the end of 2019 and if the other song aired, 'Break It Down', is anything to go by then it should be something to look forward to. As expected, the set favoured the 1983 'Lettin' Loose' debut album and its 'Rock Ain't Dead' follow up. 'Love Times Love', 'Shout It Out', 'Sole Survivor', 'Victims Of The Night' and 'In And Out Of Love' all had great energy and though the sound levels fluctuated occasionally it did not spoil the enjoyment, and it was clear the band were invigorated and the (mature) crowd responded in kind. At no time did Dave Aitken (guitar), Jez Parry (bass) and Michael Ivory (drums) seem like the new boys and they have proved to be ideal in helping to make Heavy Pettin relevant again.

Rock Goddess first came to the media's attention in the early eighties and the main focus seemed to be on the age of lead singer/guitarist Jody Turner and her drummer sister Julie. When the band started in 1977 they were just thirteen and nine respectively, and following the release of the debut album in 1983 there were legal issues surrounding the number of live shows that could be scheduled, due to Julie's age. The 'Hell Hath No Fury' follow-up (also 1983) saw the band add keyboards to their sound and though they released one more album in 1987 ('Young And Free') it proved to be their last until early 2019. Jody and Julie are still at the heart of Rock Goddess and the current line-up is completed by bass player Jenny Lane. 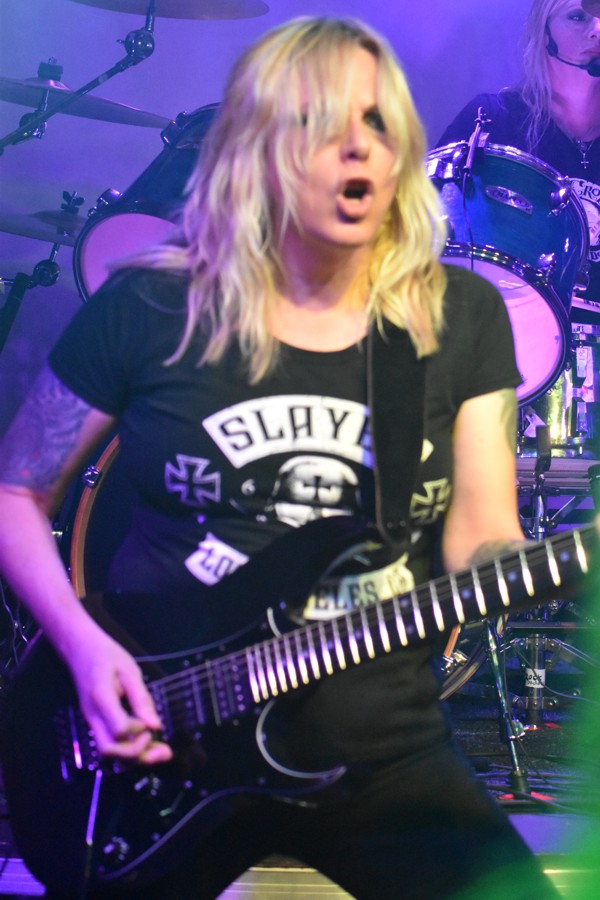 Clearly confident with the new 'This Time' album, no less than six of its nine tracks featured in the set. The likes of 'Two Wrongs Don't Make A Right', 'Are You Ready', 'Flying To See You' and 'Calling To Space' sat nicely next to the more well-known 'Satisfied Then Crucified', 'Back Off', 'To Be Betrayed' and ' It's More Than Rock 'n' Roll'. Jody still has a wail to match any of the new crop of female singers in the Modern Rock genre and is actually an underrated guitarist as well. Sister Julie holds down the beat from the back and is a very accomplished drummer, working really well in tandem with Jenny on bass. The songs may be a little clichéd, but they were delivered with passion and enthusiasm and the crowd responded as though a thousand as opposed to under a hundred. 'Heavy Metal Rock 'n' Roll' saw a nice line in audience participation and the 'My Angel'/'Back To You' encore brought things to a rousing close.

With a healthy crowd gathering by the merchandise stand to chat to and compliment the band it was time to tackle the bracing Blackpool air once more. An excellent little venue and a quality value for money double bill of no frills Rock music... just what this scene is all about. Great stuff.

Review and photos by Dave Bott