Hand Of Dimes, fronted by Neville Macdonald (formerly of Skin), are a class opening act. They make quite a big noise for just a few guys on a small stage and deliver a commercial, slightly American radio-friendly (at times) Jimmy Barnes style sound with some lovely fluid guitar. When Macdonald asks if there are any Skin fans in the crowd, there is a huge roar suggesting the band are not completely unknown to this veteran London crowd. Touring to support their new album 'Raise', they are a very professional and polished act with good crowd rapport. Whilst the songs were not as strong as some of those of Skin (MacDonald teasing us with a burst of 'Baby, Baby Look But Don't Touch' only serves to remind me of that), what we heard is pleasing and augurs well.

However, no one can out class the lovely Leigh Matty and Romeo's Daughter who deliver a set of sixteen songs tonight; the fact that they seem to fly by in an instant is a testament to their entertainment quality. The band seem to be having fun, dancing together, and Matty still sounds amazing live; she still specialises in honeyed tones set off by masterfully harmonised backing vocals. She makes it look so easy, such is her gift. Guitar craft is also always at a premium with this band and they treat the audience to a tremendous waterfall of a solo in 'Radio', a top bluesy solo in 'Enemy' and a plaintiff emotional clear and sad guitar voice in 'I Cry Myself To Sleep At Night'. Swinging side to side in 'Bittersweet', like a beautiful butterfly with her impossibly beautiful black hair still all her own, Matty – along with the band – is a wonderful slice of Rock heritage. 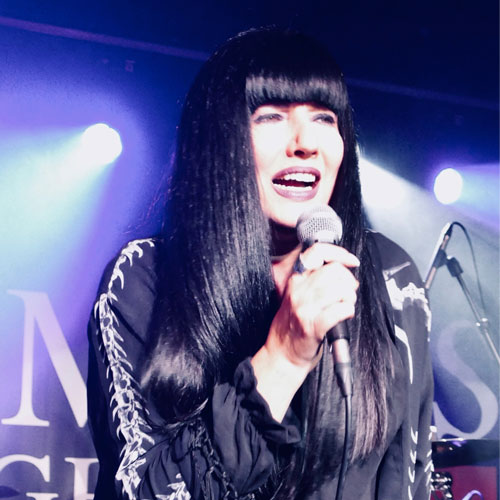 They were never ashamed of being slightly chart-orientated, but blistering solos on tracks like 'Have Mercy' remind us they are heavier live than on record and unmistakably Rock. This is a happy adoring crowd and the atmosphere is chilled and friendly for a London gig. The presence of a mother and daughter of about twenty at the front of the stage who know all the lyrics reminds us that families have passed the love of this band down to new generations. The crowd don't lose the chance to shout the "Romeo's Daughter" lyric in the middle of 'I Cry Myself To Sleep At Night', thus showing that the traditions associated with the band are alive and well. The band have thought about the encore and try to provide a different experience. As such, the storming 'Heaven In The Back Seat' appears earlier in the set. The encore instead is an acoustic version of 'Colour' (showcasing Matty's strong Vibrato), a great cover of 'No One Knows' and finally a big crowd-pleasing version of 'Wild Child', complete with finger-tapping guitar techniques for the big finish.

There was good and bad news as Matty announces that they are not intending to tour again for a while, but they have started work on a new album which will be anxiously awaited by tonight's faithful. Matty prides herself on not wanting to just be a nostalgia band and new music is important to her, as witnessed by the presence of songs from the newer albums in the set. We look forward to the tour to support the new album soon as they can get it out.