Although Walter Trout disappeared for a while from the live scene, due to health issues, his name remained big in the Blues scene. Therefore I was really excited to see him returning to London.

It was already impressive to enter that packed, stylish venue called 'Under The Bridge' where behind a great stage there was a big screen showing Walter's rocky logo. I found it very cool to see the band coming on stage, like they just got out of the pub. No certain style, no special look, just four men in their jeans and t-shirts taking over their instruments: a guitar, drums, bass and a hammond. As comfortable as they looked, as easy-going it seemed for them to start the show with 'Help me' ̶ but the way they sounded was the opposite of easy...such an energetic and well-played opener. Then his smokey, rough voice came in, where I never expected he could reach high falsetto notes with it. Oh Yes, Walter Trout is back, and right from the beginning the band spread out a good mood served with high class, powerful Blues/Rock music.

Before he started the groove of the second song, he explained that he doesn't use a set-list, they just play what they feel like. Well after 26 studio albums I am pretty sure the band never gets bored of playing shows again and again. Of course a big name like Walter Trout finds himself accompanied by freaking good players such as Sammy Avila at his Hammond, having a big, wooden vintage amp behind him. Inside you could see two old-fashioned gramophone that revolved, and the harder he hit the keys, the quicker they turned. That's what the band was about: they are natural and pure, all knowing what they're doing and seeming to be absolutely in the groove and just enjoying themselves, which was hugely appreciated by the audience.. 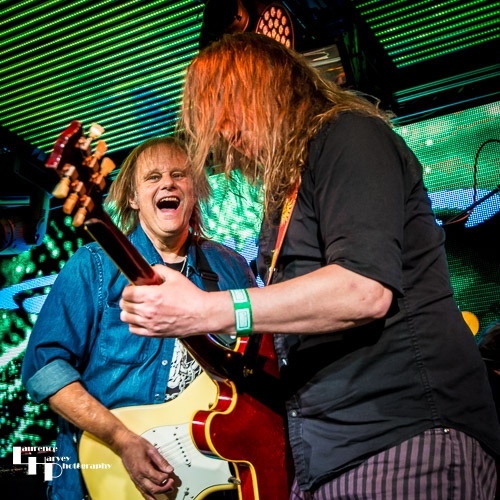 Walter Trout truly loves being here: "We are happy to be back in the UK. And if I am fucking honest, I am happy to be anywhere. Life Is great. Enjoy every minute." His sympathy and honesty on stage is why you immediately become a big fan of him. Moments like when he was kidding about Trump, saying, "Now that I got my opinion out about this man, I feel better" made you just wonder how can he be so damn cool. Then he played what he is famous for, a slow Blues, starting with a stunning guitar solo, building it up to an explosive highlight before everyone calmed down and he started to sing. That was awesome. It was the mix of an icy, gloomy feeling in the emotion of the music combined with his devilish, fiery voice. With "Come on guys, you know what to do. Let's play the blues," he introduced a never-heard before solo. Walter trout is a stylish player, with a nice sound in his smooth distortion and a great feeling to smash the guitar up and down. After almost every song he had to change the guitar as he always broke the strings. "Sorry guys, I can't play softer otherwise you would get bored," he explained.

The fourth song was from his latest and world-wide number one album. He mentioned with whom he worked with on his 26th studio album: "I have friends like Joe Bonamassa, Kenny Wayne Shepard, Joe Luis Walker on it. Jimi Hendrix, oh sorry, I got that one from Trumps Homepage. Fake news! Haha." His jokes in-between were just incredibly funny. For the next song he worked with Randy Bachmann in the studio. A powerful, dynamic and groovy song called 'Got Nothin' Left', which he sang together with his drummer, Michael Leasure. This was followed by a song he recorded live with Joe Bonamassa, the title track fromon his album, 'We Are All In This Together', which was rehearsed only once before they already recorded it. Well, when two Blues/Rock stars work together, this can only be good. In-between he had this rough, smokey voice like Joe Cocker, with the difference being that Walter's voice has an incredible range and he can switch effects on and off. On stage he welcomed his first guest, Innes Sibun, and together they let their guitars burn in the solo. Sibun's Gibson added a nice sound to it, and rarely do see two guitar players communicating like that in a solo. Incredible!

The next song was introduced as one of the few songs that is not created from his personal experiences, 'Got A Broken Heart', which has a stunning vocal on it. I try to compare his guitar playing with other Blues legends, as I normally would do, but to be honest it is hard to compare him with anybody because he has such an unique and remarkable style in the way he plays, the sound he chooses and the feeling he adds.

Stephen Dale Petit was his next guest, who could prove with his great guitar playing why he deserved to be standing next to Walter Trout. Walter then invited one of the top female modern Blues/ Rock singers, Sari Schorr ̶ a volcano on vocals, reminding me of Melissa Etheridge as she did an awesome version of 'Work No More'. Her wonderful deep and smokey voice was carried by a warm and full bass sound. 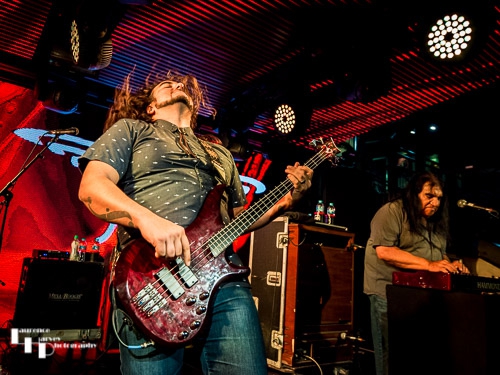 Walter Trout is actually a high-energy artist and so are his songs, but when he gets his acoustic guitar out then you know this will be getting emotional. Indeed, he then talked for the first time intensively about his liver disease a few years ago, that nearly killed him. He was laying on his back for eight months, got brain damage, could no longer speak, died a few times. When they brought him back to life he didn't know his wife anymore and had to relearn how to speak, how to play the guitar, practising seven hours a day. This song is about that time, because after he had been in bed for half a year in a hospital he asked his wife, to whom this song is dedicated to, to just fulfil one wish: 'Please Take Me Home.' A beautiful, emotional song that opened his very big heart and showed what a fighter he is.

For the last song he brought his bass player, Danny Avila, to the front. Danny is the son of his Hammond player, Sammy, and it was his first time ever in the UK. He stood up high on a speaker and did a magnificent bass solo, where we could hear that he is actually a guitar player ̶ this was unbelievable. As an encore they finished this great evening with a groovy cover of 'Going Down' that he sang together with one of his crew members, who almost sounded like Axel Rose. He ended the evening with a reminder how important it is to sign up for organ donation, as this saved his life.

Thank God he survived and provided us with this amazing and unbelievable concert, with great guest musicians, entertainment and breath-taking music.

Actually it is said legends die young. But not Walter Trout, he belongs to those few legends who happily are still alive and going strong! 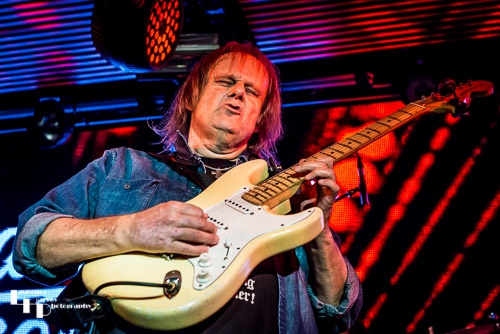