Musically innovative. Conceptual. Lyrically thought-provoking. Melodic. Powerful. Not your typical Rock band by any stretch of the imagination; this is Queensrÿche.

One of the band's many strengths has been the ability to off-set their heaviness with delicate melodic sounds. The band's 15th studio album is no exception, covering familiar territory stylistically and lyrically, which will not disappoint the faithful looking for Queensrÿche's brand of epic Progressive Rock. Fireworks sat down with vocalist Todd La Torre to talk about the long-awaited new album, 'The Verdict'. 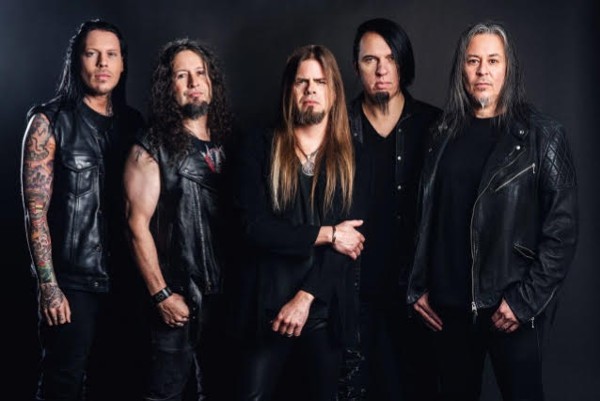 Can you compare your career now to when you first started out? Is there a difference in the way you approach your music?

Since I have been in Queensrÿche, we kind of write the same way together as a band. But certainly back in the day we didn't have technology to send files across the internet and share ideas, so everyone was always writing together in one room as a band. You know, a lot of bands don't really do that anymore. There are some but it seems because people live in different places you might come up with a guitar or vocal idea and then send it to Dropbox or something like that. On this album we had a mixture of both because we are touring all the time; we are together sharing and recording little ideas to start shaping songs but when we did the pre-production on the new album is when we all really kind of dissected the songs. We worked together on those ideas as a band in the studio, so that was a really great thing to have that chemistry with everybody in the same room writing. We did that on the last two albums but we did it a lot more on this record.

What would you consider the strongest outside influence on your music?

That's hard to say because everyone in the band has different listening tastes. Bass player Eddie Jackson likes all kinds of music but he brings more of the Pop side, so, he is really great with vocal melodies and things that are very memorable for melodies. Michael is more of the Hard Rock guy but really likes Pink Floyd, Zeppelin and stuff like that. Parker, our other guitar player, is more into Punk music so he brings a little element from that. My influences range from Billy Joel to Heart to Iron Maiden ... you know, a lot of the more Heavy Metal stuff. So it's just a conglomerate of all of our outside influences, I can't say that there's one main influence. We all bring our own little flavour to the songs and that's what makes them sound like Queensrÿche.

The band is known for creating thought-provoking conceptual albums that deal with such subjects as the decline of civilisation. What are you trying to open people's minds up to with your music?

It's common for us to talk about political things that are happening in this country and throughout the world; we talk about social injustices, corruption and those types of things. So instead of trying to get people to think a certain way, we really take the approach of exposing these things and letting people just think about the topic – such as what do they think about it and why do they think that way, verses leaning on a particular subject or certain way on something. We want people to think for themselves and that's kind of what has been a common thread throughout Queensrÿche's lyrical content. Those kind of topics, getting people to scratch their heads and think about some things even if they are unfavourable or uncomfortable. There are some people who do not want to talk about these issues so we are able to kind of do that through our music.

The band has always been experimental, with some of your early material sampling keyboards and dabbling in electronic sounds. One of my favourite singles was from the 'Rage for Order' album, the cover song, 'Gonna Get Close To You', which sounds like it could have easily fit into a horror movie soundtrack, having a John Carpenter vibe. What are your thoughts on the band's early musical direction compared to now?

That's a good question! I think that definitely, as with any band, you do hear some experimentation. You know, bands are trying to find their sound so you do hear that process happening in the first few records. I think that most of the guys in the band have always said that they felt that they started to really get their sound on the 'Rage for Order' album. I think the first four albums were probably the fans' favourite albums, then 'Promised Land' was the fifth album and that was also well received. After that I think the music took a different direction, so the last six or seven years, I think, have gone back to more of the band's roots. You can hear some of those experimental elements happening in our music today, it's gone a little more back to the heavy Hard Rock and heavy melodic element that the band is known for. I'm a big fan of the earlier albums and things are really good with the direction that the band is going now.

Is this album a continuation or reaction to your last?

Conceptually, no, but musically it feels like the logical progression from the last album as far as evolving; the songwriting has evolved in certain ways conceptually. We had that common thread of dealing with social issues I talked about but it is its own separate album. It is not a continuation of the last one but it is the logical progression for what we're doing creatively.

In terms of sound, what did you hope to accomplish this time around?

We wanted to have a few faster-paced songs on this record. We wanted to have some more progressive elements, maybe a little heavier than the last record. Which, I think it definitely is but we still have that diversity. There are still some slow, pretty things happening on this album. So it's not just a straight forward Heavy Metal or Hard Rock record. It definitely has the diversity Queensrÿche has been known for.

What track on the album are you most excited about, or is there a song on the album that best expresses how you feel at this point in your life?

I got a few favourites, one of them is a song called 'Light Years' that I think people are really going to like, it's a very interesting song. The last track on the record called 'Portrait' is a slow, melancholy kind of song and shows a very different side musically to the rest of the album. I think that this album is a good contender to be rated amongst the first five records. I think it belongs somewhere alongside those albums.

Any upcoming tour plans to support the album?

Yes, we will be starting a tour and we have the band Fates Warning as support for a month. That will start the beginning of March and will be a month tour and then we will be heading to Europe. July 25th is our first show in Europe and we will be there through August 18th.

One can appreciate 'The Verdict' on musical quality alone, but for its full impact listen to the evocative lyrics and open your mind for interpretation. Although the album has some classic elements consistent with the band's musical heritage, it is also very much an album for 2019, and is a must for Queensrÿche fanatics and novices alike.