Hi Kris. 2017 has been an exciting year for you. You gigged at big festivals, like the RAWA Blues festival in Poland and the Ramblin' Man Fair. Then you have signed to Mascot Label Group, now you will release your new studio album, have an upcoming UK tour and even are supporting Beth Hart on her tour. 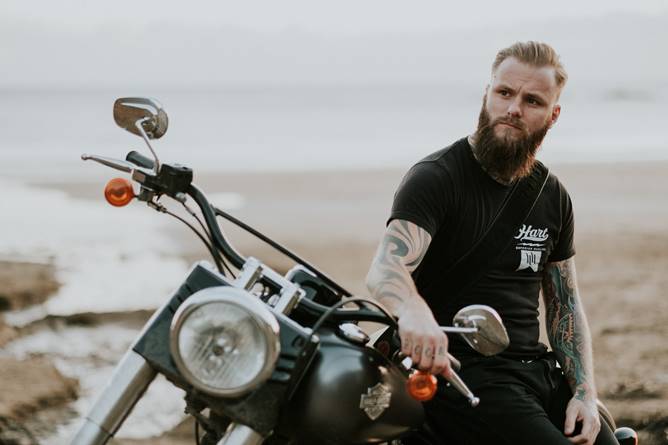 That sounds like a winner year for you. But winning seems to be your ambition. You've been a successful martial artist and won 14 out of 17 fights.
So you are a real fighter. Tell us about that experience.

I was fighting for about 10 years and I was training other fighters as well. It was an exciting time, I got to visit great places like Singapore, Las Vegas, Thailand, where I spent a few months. It can be stressful but I met great people and got a lot of opportunities during that time.
I still did some music besides. I was always playing in Blues or Rockbands. We were more pub or bar bands and did covers. In that moment I wasn't really into writing as I was so focused on fighting. I did the gigs just to earn some extra money on the weekends.

As a fighter you have already been extremely successful. Tell us about your greatest and challenging experiences in that time?

The best experience, I loved Las Vegas, the place, people and training were great. Just loved it all over. One of my best shows was in Singapore. It was massive. There were 8000 people, lots of media, tv representers, where I had to do interviews etc.

Challenging times? I guess it was always challenging. Before every fight, I said to myself backstage, I never gonna do this again. But then you get the next fight booked. It is definitely challenging. The hardest thing is the training and the diet, then dealing with the nerves on that day, dealing with the adrenaline, making sure that you are ready to go before each fight.

Wasn't it also a painful time?

You don't really feel pain, all the adrenaline kicks up, but you do feel it afterwards.
I had some broken bones. Nothing like major, just the usual stuff, like nose, ribs, thumb. But that happens quite often. Well that is part of the game, isn't it?

What was the moment you decided to stop fighting and do music?

After I fought in Singapore I went to Thailand and fought there. I won that. Then I just felt, that this is it for me now. For me I had achieved what I wanted to achieve. The strains and stress that it puts on you if you are fighting on a higher level, is a lot. Then on top with the dieting and the strict regime, I just felt like I had enough of it.

I then felt like I needed another outlet. So I just started to write some songs, I didn't really think that anything was going to happen.
Then I asked some guys, that I used to play with in some cover bands, if we should just have a go and play around the songs. This was how I came back to music.

What sort of experience from your fighting time can you now transfer into your music?

I had some great and hard life experiences. It is all part of the journey. I started to play music when I was very young. But when the opportunity came up with fighting, I thought I will do that. And maybe without that fighting background, I wouldn't be on that point in my music, where I am now. So every experience helps you to move on.

How did your musical journey start?

My dad played in band. He was a big fan of Gary Moore, Classic Rock bands, Deep Purple, Rolling Stones etc. So I was always surrounded by good music. That inspired me to pick up the guitar when I was around 5 years old, then I had my first gig when I was 8 years old.

Then I was lucky to already have toured the East coast of the states twice when I was 18. I had an original band and we had a manager, that invested in us. He had some contacts in the states, therefore we could record an album in Philadelphia. It was a great experience. I was the lead singer and lead guitarist.

Who were your inspirations?

When I started out it was Gary Moore. He really got me into the guitar playing and into the blues.

Now you are touring with Beth Hart. Is there any further artist you would love to be on stage with?

Lots of people. Like Joe Bonamassa. I also do love Country Rock Bands, like Black Berry Smoke or Lynyrd Skynyrd.

You have a lot of gospel styles in your songs, like choirs. Where is this influence coming from?

It comes from the Southern Rock Style like Lynyrd Skynyrd. Allman Brothers. I love the big southern sound and wanted to bring that into my tunes.

Now you will release your new studio album. I already had a listen to it and loved the timeless approach and that southern road trip feeling of it. It is called: The Divine and Dirty. What does that mean?

The name came after the album was recorded. It came up, because it represents the sound of the album. We have the dirty, heavier riffs, mixed with the gospel- sound, which is the divine part. Then the songs are a split of good and bad experiences in my life. So the album name reflects those opposites perfectly.

Could this be a reflection of yourself, too? The mix of the bright and dark side. Cause when I see you in person, you are very calm and laid back, but then again you have that extremely though and powerful fighter inside you.

Haha. Well maybe. When I write songs, I just write whatever comes out basically. But yes, maybe it is something deeply routed in my soul.

Talking about some songs, 'Blood on your hand' is quite an aggressive title. What is the song about?

It was something that I have heard in the news. It is about taking responsibilities for your action. Sometimes people do things, that they think it is little. But they don't realise that it could have an big impact on someone else. It's when you say a few things and it can result in something worse.

What about‚ 'Kick me down'?

Those are the songs that are written more in general, so that people can relate to it.

Tell us about the most personal or deepest song on the album.

We finished the album with 'Watching over me'. That is the song that I wrote for my dad, who died a few years ago. And he was my biggest inspiration for music and in general. He even played bass in my band for quite a few years and we played almost every weekend in a cover band together. So he was very important to me. It was a big shock, I was around 14 years old when he died. This song was the second song that I wrote over all, since I started this band in 2014. It is one of our highlights when we play live. This whole album therefore means a lot to me. It also the first album that I release for Mascot records.

Now that you have already had such a great success so far, what can we expect in the future?

We have our UK tour now coming up to promote our album, with 14 headline dates. Then we head out with Beth hart on tour, where we will play an acoustic set.

After that, we have lots of festivals coming up in the summer, like the Rambling man back this year at the Blues stage. Towards the end of the year we hopefully do a European tour. I just love playing live and I want to get out and play as many live shows as possible.

Click HERE to read the "The Kris Barras Band" live review on Rocktopia!