Swedish death ‘n’ roll trio Jesus Chrüesler Supercar have been confirmed as Special Guest act at Swedish heavy metal five-piece Bullet’s upcoming 02 Islington Academy headline gig on May 16th.
Jesus Chrüsler Supercar’s second album, ‘35 Supersonic’, released in April 2016 on Rodeostar / SPV, is a ferocious yet melodious, thoroughly uninhibited, storming mix of rock, punk, doom and death metal. Vive Le Rock’s Pete Craven reviewed in the magazine’s May 2016 issue stating; “This Stockholm trio comes hot rodding down the highway revved up on a tank full of noxious hard ‘n’ heavy rocking, sounding like a high speed collision between early days Entombed and ‘Supershitty’ era Hellacopters. Full blooded, thunderous riffage and bellowing hoarse vocals is the order of the day. ‘35 Supersonic’ proves to be 11 tracks that are positively turned up to the hallowed 11, from opener ‘Let It Roll’ through to the closing ‘I Gotta Go’ (one of my choice picks of the album).”
Bullet’s stonking sixth studio album, ‘Dust To Gold’, set for release on Steamhammer / SPV on April 20th has already won a host of rave reviews; Fireworks Magazine’s Steve Swift states in the current Spring 2018 issue that  “From the opener ‘Speed And Attack’, through the powerful ‘Fuel The Fire’, to the slightly slower ‘Wildfire’, I love this album! The title track and the aforementioned ‘Wildfire’ have an almost Heaven & Hell feel about them. It’s classic eighties metal (or Rock – call it what you like), but with a solid production sound that brings the whole style up to date.”
Classic Rock Society’s Terry Craven proclaimed in the March & April 2018 issue that “‘Dust To Gold’ is a thrilling heavy rock album that delivers the goods on each of its twelve tracks of highly charged mayhem. Hofers has a truly powerful voice with a wide range and the twin guitars of Klang and Lyrbo keep the solos and riffs coming thick and fast. They have the energy of AC/DC, the power of Iron Maiden and the songs of Judas Priest; come on, what’s not to like here? Check out the title track as this superbly delivered mini-epic totally sums up this exciting band.”
Bullet have just unveiled a video for ‘Fuel The Fire’, taken from the album, which can be viewed on youtube at https://www.youtube.com/watch?v=M_KTlSbaVUU&feature=youtu.be
Bullet, who hail from Växjö, were formed in 2001 by vocalist Hell Hofers and guitarist Hampus Klang. Party animals who love being on the road, Bullet have subsequentlty released five excellent studio albums, toured most European countries several times and performed at some of Europe’s most prestigious festivals, including Rock Am Ring, Graspop, Sweden Rock, Rock Hard, Keep It True, Headbangers Open Air and Wacken (twice). ‘Dust To Gold’ will be available as a Digipak CD (+poster), double gatefold (with printed inner sleeves) 80 gram golden vinyl LP (+ CD in cardboard case), download and stream.
Tickets, priced £12.50 (plus booking fee), are available from Ticketmaster.co.uk and all other usual outlets 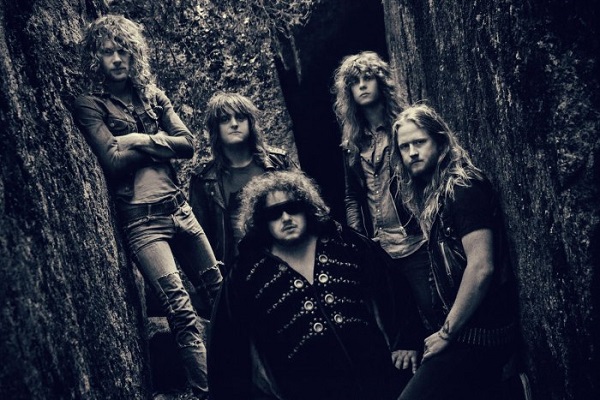