In a rock’n’roll world considerably represented, or even dominated by men, female-fronted rock bands were more or less an exception to the rule. However, bands such as Heart, Saraya, Femme Fatale and Joan Jett & The Blackhearts proved that where the loud guitars and heavy sound appear, there is no place for sexism. In the 00’s, the situation is no different – among the newly founded glam/sleaze bands the female-fronted ones are the definite minority. Still, such bands as Swedish rockers Vanity Blvd, fronted by a charismatic singer Cindi Savage, prove the old rules to be completely wrong. To put it simply – chicks can rock hard! Obviously, the thing about the gender prejudices in rock’n’roll world was one of the issues I had to cover as talking with Cindi - especially being the rock chick myself! Of course, this issue was not the only one - the singer and the other musicians involved in Vanity Blvd – Traci Trexx (guitars), Frecko (drums) and John J. (bass) spoke about their inspirations, their band’s beginnings and their 2008 debut album ‘Rock & Roll Overdose’ as well.

Traci Trexx: Hello there! And thanks for showing interest in our band! On vocals: Cindi Savage, on guitars: Traci Trexx, on drums: Frecko and new on bass: John J.

Now, a bit of important storytelling. How the group's history began?

Cindi Savage: I formed Vanity Blvd back in 2005 along with Trexx's bass-playing little sister, Roxxy. We were looking for a guitarist, so we asked Trexx. He brought along his drummer, Frecko from their 70s psychedelic rock band. Roxxy played bass on the studio album but decided to drop out after the album was recorded. It was for many different reasons, so no hard feelings towards any members of the band... we're all still friends. Trexx's old friend Ted took over the bass and after him there was Marty, then the band decided to take a break which lasted for about a year. Now we got our shit together and are now loaded with lots of new energy, ready to claim a place in the rock world once again. Now a new star has been found in the world of four strings babes, John J, and hopefully he'll last awhile (laughs).

What's also very important, you're one of the few sleaze bands fronted by a female singer. How do you all get along in the band and is having the chick behind the mic more of a blessing or a curse?

Cindi: I’ve been asked about it a lot of times before, and my response to that is I don’t think it’s a gender issue... at least I don’t want to believe that, but I get your point. The world of rock and metal is very dominated by men. But since I don’t have that girly high pitched voice, and I don’t act on my sex, I don’t think people see me as a gender, anything more than a rock musician. I don’t really think it matters that I’m a woman, or if I were a man. Besides, you have men that sound and act more girly than me in this music world.

What would you call the first breakthrough moment in band's career?

Cindi: The first breakthrough we got was already after we'd released our first demo for reviews. It received very high ratings and people loved the sound, which was a really good feeling of recognition.

In 2008 you've released your debut album ‘Rock & Roll Overdose’. How would you recommend the record to those who haven't had a chance to hear it yet?

Traci: If you like music from the 80s and still get a kick from straight-in-your-face glam rock, and hard rock, check it out!

On ‘Rock & Roll Overdose’, some of the songs from your EP ‘Playin' It Ruff’ were included (like ‘Feed My Obsession’ or ‘Share My Pain’) while the others, like ‘Soulshaker’, were actually dropped. Why the regular album features only the part of the EP?

Frecko: We had a lot of songs for the album that we liked, and we just saved ‘Soulshaker’ for the future.

What's your favourite song on ‘Rock & Roll Overdose’ and why?

Cindi: I love all the songs on the album, since each and every one of them have a special meaning, and place in my heart. But if I had to choose just one, I think I'd go with ‘Come Dance’. This song was written about a very special person in my life, and that desperate desire of recognition from that person.

Traci: I like them all, it depends on how I feel on a particular day... (laughs)

Vanity Blvd's sound has been often compared to the early Motley Crue. Do you find those comparisons motivating and satisfying, or maybe rather irritating? What other groups you've been influenced by as a band?

Traci: Mötley Crue is a great band, and to be compared with guys like that is an honour. They of course inspired us, together with bands like Saraya, Billy Idol, Kiss, The Runaways, Joan Jett, Lita Ford and Whitesnake, just to name a few.

Since the 80s are long gone and the raunchiest scandalists of the era had already settled down - is the band's current life on the road in vein of "sex, drugs and rock'n'roll" cliche? Hard living from suitcases or wild backstage parties…which of those schemes are more familiar to you?

Frecko: Well, I guess sex, drugs and rock'n'roll isn’t a cliché. There are of course bands that do it, or just want to be like that, and that’s fine. We are just as we want to be, if we want to have sex, we have it… (laughs) I wouldn’t say we sleep in trash cans. I don’t mind wild backstage parties, and I guess most don’t.

Traci and John J: (laughter) We love to party and have a good time, of course, but the music and our fans are most important to us, and we take it seriously. We always try to give the fans what they came for... Then, when we get of stage….we bring the party on, baby!...

Frecko: The future of rock’n’roll is playing back on arenas, big events, festivals and world tours. And Vanity Blvd are going hop on that train.

Traci and John J: ...Yeah, and hopefully still making great records. We love playing live, meeting our fans and just having a good time... There are so many great new bands out there, and not just the new ones. Rock´n roll will always survive, because I think people want something that’s genuine and real, and that’s rock´n roll!

Scandinavia has been also the centre of everything about the glam and sleaze in Europe! How do you judge a current music scene here in Europe?

Frecko: Guess that depends on the market, what’s hot and what’s not. For us I think Europe would be a good market, and we would love to tour, and meet our fans there.

Does such band as Vanity Blvd. experience troubles with gigs booking or record sales? How do you get by in the world of digital downloads and the decreasing popularity of rock music?

Frecko: I think all bands and all the people who are making music sometime have experienced such problems along the way. This is life, problems appear every day, It’s not a dance on roses every time, but there is always something to do about it. A lot of people buy records, and a lot download them. Hopefully, if they like the album, they will buy it.

How important do you find the Vanity Blvd's sleaze rock image in your music career? What are your actual fashion influences?

Frecko: Important or not, it’s rock n roll, and image is important in all music genres I would say. Influences in fashion? Well I don’t know really, actually I would say that you should wear what you think looks cool, and don’t care shit about what others say. Don’t just wear something that others say you should wear, just go your own way, period!

Traci and John J: Yeah! And the music will always come first. If the songs suck, it doesn’t matter how you good you look. We dress the way we like, and we take inspiration from a lot of things...mostly from music of course.

Looking back, what was the first concert you guys ever attended and the first record you owned?

Cindi: My first concert was the band Garbage, and my first record was ‘Nevermind’ of Nirvana.

Frecko: Motley Crue sometime late 80s. I was a little boy there with my sister, and I remember Tommy's drum solo was so cool, and I was just centimetres from getting that damn drumstick. I never got it, cause I was too short (laughs). First record was with Kreator.

John J: My first concert was Motörhead in Stockholm, I can’t remember the first album, maybe Sex Pistols ‘Never Mind the Bollocks’, but it was Kiss ‘Destroyer’ album that changed my life, and made me want to play Rock´n Roll.

Traci: First concert was Kiss in Stockholm and album was Kiss ‘Alive III’.

Moving back to the topic of the band, what are your future plans? Maybe a new album, or some bigger tour?

Frecko: Gig, gig and more gig. And of course we have album plans also, but that’s in the future. Songs are not a problem, but Vanity´s main focus right now is to gig.

Thanks for the interview, all the best in the future! In the end, please drop a word or two for our readers.

Vanity Blvd: Thank you so much for your support and patience, it means a lot to us. And check us out at www.vanityblvd.com. 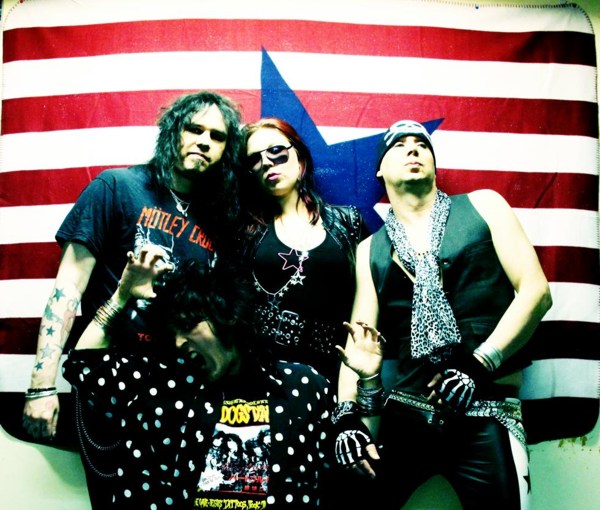