Daniel Ekeroth is the author of Swedish Death Metal; the acclaimed book published by Bazillion Points (http://www.facebook.com/swedishdeathmetal). He has also released the book Swedish Sensationsfilms (http://www.facebook.com/sensationsfilms), about Swedish trash cinema. He is also a contributor to Sweden Rock Magazine, and has written for numerous forgotten fanzines. Over the years he has played in a number of extreme metal and punk bands, such as Dellamorte, Insision, Tyrant and Diskonto. Today he is playing in the dirty punk/metal act Iron Lamb (http://www.facebook.com/pages/Iron-Lamb/201720046525687) as well as crust/death band Usurpress (www.usurpress.com). 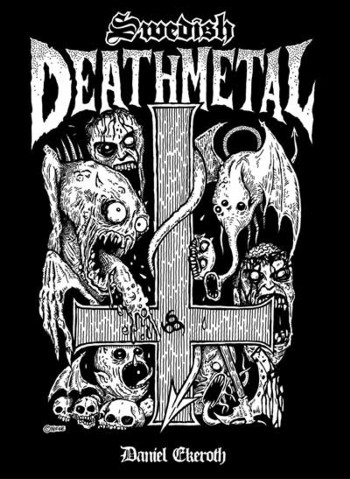 Visit the Bazillion Points website for info on how to buy the book.

How long did it take you to research and write your book, Swedish Death Metal?

I would say about six years. Initially I wasn’t that active, just did some bits here and there. I guess it all started with a list of demos I had lost over the years, and before I knew it all turned into this massive book project. As the years went on it took up more and more time. The last two years I was working every day, all day, I probably never would have started had I known how much time and work it would consume!

How did you approach the researching and writing of the book? It must have been a daunting task…

Since I grew up in the middle of this Swedish death metal movement, I kind of got much for free. I had saved hundreds of fanzines, and most of the albums were safely in my shelves. I started with borrowing all the demos I could get my hands on from collecting friends, and then begun the big puzzle of fitting it all together. Since I knew many of the musicians, it was pretty easy to get in touch with the main personalities of the scene for information and interviews. The writing itself was made during nights and weekends, since I had a full-time job during the entire process. I also played intensely with Insision during this period, so I basically had no spare time at all.

Are there any rock/metal books that provided a template for how you wanted to approach your own tome given the scale of the project?

Not really, I just made up a picture in my head of what kind of book I myself wanted to get my hands on. I mean, the index at the end was just insanity to make! If I had had any experience, I would probably never attempt to make that. Very time consuming and hard to get straight. Still, I’m really glad I made it since it shows how much there is out there.

Who are your favourite Swedish bands?

May 11 marks the 25th anniversary of Bathory's ‘Under The Sign Of The Black Mark’. What are our thoughts on the album?

Bathory is probably the most important Swedish band of all, and that album really set the parameters of all black metal to follow. Basically, it is the blueprint for everything that happened in the ‘90s. You just can’t argue with UTSOTBM, it’s just epic. The catchy songs, the atmosphere, the raw sound, the insane vocals... Probably the best black metal album ever made.

Who are your favourite metal bands of all time regardless of nationality?

Black Sabbath, definitely. Everything they did 1970-1983 is fantastic. All metal can be traced back to Sabbath.

Can you recall some of the best gigs you’ve ever attended?

Oh, many of the gigs in Fagersta from 1988 to 1992 come to mind. Merciless/Sodom/Sepultura was absolutely wonderful, probably the best gig during that period. Then Morbid Angel in ‘90, Motörhead in ‘89, Napalm Death in ‘88...it just goes on. However, the best audience I have ever seen was during At The Gates comeback tour when they played NYC. Everybody screamed every lyric so Tompa couldn’t be heard! That was just magic...

Some of the Swedish death metal bands do have a slight melodic edge such as InFlames. What are your thoughts on melody in metal?

Well, it works for heavy metal but when more extreme metal bands turn melodic I hardly ever like it. Dissection and At The Gates can pull it off, but if you turn more melodic than that the edge kind of disappears in my eyes. I wish those bands well though, but it is not my brand of metal! I like it raw...

When did you become a metal fan?

I can’t remember, I was born a fan I guess. I got my first Kiss album in 1976, and I’ve been banging ever since. I just can’t remember my life before metal at all.

Are there any metal writers whose work you enjoy reading?

Ian Christie, of course. I was very happy when he contacted me about an American release of my book. Sound Of The Beast is such a great book. I also adored the book on Hawkwind Carol Clerk, even if that might not count as metal. Albert’s death metal examination Choosing Death is another good one. Well, there are so many good books out there...can’t recall them all right now!

Are there any books on rock band metal that you’d recommend?

The aforementioned The Saga Of Hawkwind is great, so much better than that mediocre Lemmy biography. Then the biographies on Keith Moon and Paul DiAnno sure have entertainment value! But the book I like the most is probably Our Band Could Be Your Life by Michael Azzerad. This examination of the US indie/hardcore underground is the best book written about music ever in my opinion – just get it! And get all Big Black records so you have a soundtrack to it!

What are your thoughts on the current state of metal magazine publishing given the popularity of the Internet and online magazines?

Compared to when I was young, it is dead. However, there is such an amount of good books now so that kind of balances it out! Some things turn worse, some better. It is a very different world now, that’s for sure.

What are your thoughts on the current metal scene in Sweden?

Better than ever. Look at new bands like Morbus Chron, In Solitude, Ghost, Stench, Tribulation...oh it just goes on! There are also far more gigs now that ten years ago, so I’m optimistic at the moment.

Can you describe your music collection? (CDs, LPs, books, memorabilia…)

Well, that’s easy – I sold all my records and films to finance the book! I just saved about 500 favourite vinyls and 200 CD’s. I still have about 500 metal fanzines saved as well, along with 1000 books. In addition, I have about 1000 fanzines about horror films and 1000 film posters. I also have six basses, and a few guitars. It was painful to sell my collection, but I had to move on and create instead of just being an owner.

Are you working on any more metal tomes?

Not at the moment, I’m too busy playing in Iron Lamb and Usurpress at the moment. I occasionally write for Sweden Rock Magazine though, and I just might have a new book idea up my sleeve... 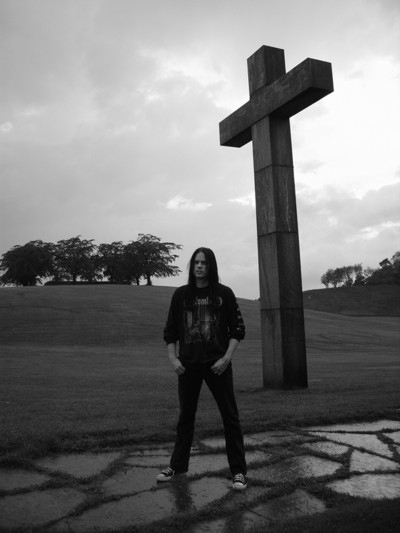