Limited Edition of VIVA! Hysteria sold exclusively via Best Buy in the USA, HMV in the UK and in selected outlets in Germany

Def Leppard’s anticipated live double album and DVD - VIVA! Hysteria - will be released on October 18th in Europe and October 22nd in North America on Frontiers Records. In addition to the previously announced 2CD/DVD, DVD, Blu-Ray digital editions, the band has recently revealed that a limited edition of VIVA! Hysteria will be available via Best Buy in the USA that includes the live double album and concert on Blu-Ray. Fans wishing to pre-order this edition can do so at bestbuy.com. The item will also be available exclusively via HMV in the UK and via selected outlets such as Amazon.de in Germany.

The VIVA! Hysteria concert was filmed over eleven nights in early 2013 at Hard Rock Hotel & Casino Las Vegas’s intimate music venue – The Joint. The concert features the band performing their classic, 12x platinum album Hysteria in its entirety, plus many of the band's greatest hits.

Earlier this month, the concert was shown in theaters. Thousands of fans experienced the concert as special theatrical event, taking them on nostalgic ride of the band’s high energy performance and showcasing their elaborate set design created only for the Las Vegas residency. Guitarist Phil Collen told the Associated Press, "It was fun, actually, and a totally different way of doing it." He continues to say, "It was a different dynamic doing the album in full, and it was much more theatrical."

Praise for VIVA! Hysteria concert: “Def Leppard were one of the biggest rock bands on the planet, dominating radio with their polished arena-rock. But as they demonstrated earlier this year with their Viva Hysteria! concert series (at the Hard Rock Hotel in Las Vegas), the band's diehard fans remain loyal and rabid.” – RollingStone.com

“I appreciate how tightly and powerfully it's played, and also the interesting echoes of Queen.” – The Guardian

The VD tracklisting is as above but also includes bonus content of the acoustic medley: “Where does love go when it dies”/”Now”/”When Love & Hate Collide”/”Have You Ever Needed Someone So Bad”/”Two Steps Behind.” 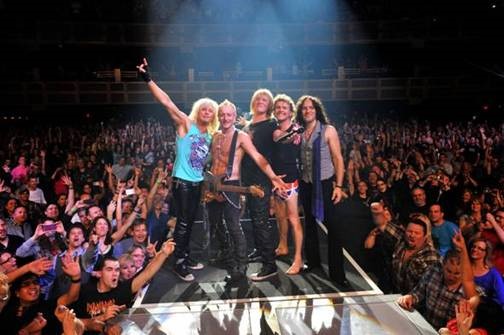