Multiplatinum guitar icon TED NUGENT has returned this week with a new live 2 CD + DVD set, ULTRALIVE BALLISTICROCK, out now on Frontiers Records. The electrifying live footage was captured and recorded by 7 cameras in 5.1 audio mix on the “I Still Believe Tour” at Penn's Peak in Jim Thorpe, PA on August 14, 2011 and features NUGENT’s arsenal of classic rock hits including “Stranglehold,” “Cat Scratch Fever,” “Wango Tango,” and many more (full track list below). The lineup on the CD/DVD consists of the legendary-and-still-raging NUGENT on guitar and vocals, Derek St. Holmes (rhythm guitarist and the voice on “Stranglehold”) on guitar and vocals, Greg Smith (Rainbow) on bass and Mick Brown (Dokken) on drums. The collection is available in three formats--2 CD+DVD deluxe edition digipak, DVD and Blu-Ray.

UltimateClassicRock.com and Loudwire.com exclusively premiered live videos for “Stranglehold” and “Cat Scratch Fever” this week. UltimateClassicRock.com raved, “‘Stranglehold’ is an eight-minute epic that kicks off with what very well might be the best opening guitar lick in rock history. It doesn’t let up from there — in fact, we have it listed as one of the Top 100 Classic Rock Songs of all time — and this dynamic 2011 performance from Penn’s Peak demonstrates why pretty clearly…it’s Uncle Ted’s energy, charisma and guitar playing that dominate the proceedings, particularly during the song’s famous extended solo section.” (10/21/13)

“Stranglehold” can also be enjoyed here:

In other news, NUGENT will be the featured guest on the nationally syndicated radio show Rockline with host Bob Coburn tonight (10/23) at 8:30pm PDT / 11:30pm EDT. Fans are encouraged to call to speak with NUGENT toll free at 1-800-344-ROCK (7625). For a station near you and for information on how to listen online go to RocklineRadio.com. The show will be streamed on the Rockline website for two weeks beginning the evening after the broadcast.

“The passion, guts and glory that Ted Nugent puts into his guitar playing has always been something that speaks to me. It’s layered in the past…the blues…Motown…early rock and roll…but it is pure; it is honest. It is Ted Nugent’s musical voice and it is loud. Time has not changed that…Ted Nugent is still one of the original loudest guitar slingers on planet Earth. And his new album will remind everyone of that.” --Jeb Wright, CLASSICROCKREVISTED.COM, October 8, 2013

“Nugent is in classic ‘Uncle Ted’ form on this release. This man has a Rock ’n’ Roll soul like no other, pure Detroit dynamite, infused with a bit of Motown & blues.” --Robert Cavuoto, MYGLOBALMIND.COM, September 5, 2013

“Ultralive Ballisticrock is super high energy from beginning to end, but the set ends on an especially strong note with the hits ‘Cat Scratch Fever’ and ‘Stranglehold’ along with a take on ‘Great White Buffalo’...” --Kevin Wierzbicki, CAMPUS CIRCLE, September 6, 2013

Tracklisting for the show here:

DVD/Blu-Ray Bonus Footage: “Spirit of the Wild” "The Making of ULTRALIVE BALLISTICROCK"

About Ted Nugent:  Ted Nugent has carved a permanent place in rock & roll history as the ultimate guitar-shredding showman, selling more than 40 million albums, performing more than 6,500 (!) high-octane concerts, and continuing to set attendance records at venues around the globe.

Ted’s no-holds barred career spans five decades of multiplatinum hits. From the ground breaking Amboy Dukes' hit "Journey to the Center of the Mind," to classics like "Stranglehold" (ranked in the Top 100 Classic Rock Songs and #1 Guitar Lick), "Cat Scratch Fever," (32nd Best Hard Rock Song of All Time) Damn Yankees’ chartbuster "High Enough," and cult classic "Fred Bear” (the most requested song for radio airplay in Michigan & Wisconsin), Ted and his inimitable sound have been featured on VH1’s “Behind the Music,” A & E’s “Biography” and more.

Nugent was named Detroit’s Greatest Guitar Player of All Time by readers of MLive! For millions of passionate music lovers everywhere, Ted delivers the Ultimate Life Soundtrack. A Ted Nugent show is not just a performance—it’s a firebreathing celebration! 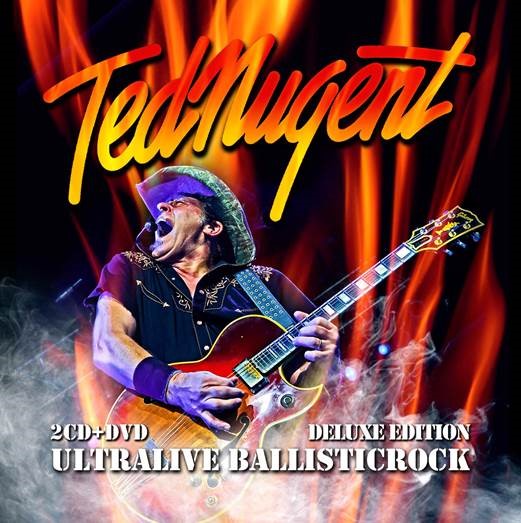