Multi instrumentalist and singer Darren Smith has been the go-to guy in the Canadian music scene for over twenty years. Whether it be fronting his own bands, playing drums for Harem Scarem, guitar for Helix or appearing with any number of bands in the state of Ontario and beyond, he has forged a career as one of the best in the business. Now, he’s embarking on another chapter, singing for guitar god Jake E Lee in his new venture Red Dragon Cartel. I asked Darren how it came to pass….

How did you get the job in RDC?

My name had been thrown out there in Vegas. Roughly at the same time, the manager for Long & McQuade (a music store in Canada) named Kevin Simpson told me Jake was making a comeback and was looking for a singer. I sent a video of a song I did with a project called ‘Bastard’. The song was called ‘L.A. Whore’. Pretty good rocker, as well as an MP3 of a track I wrote for Velvet Revolver’s audition mixes. My phone rang 12 hours later.

I've seen you as a guitarist, singer, drummer and bass player in bands over the years - which do you prefer?

I love to play all sorts of instruments. I switch back and forth so I don’t get bored. I really enjoy singing right now but miss the drums and guitar. Maybe next year I’ll be playing some guitar live. On occasion I’ll play ‘Rock and Roll Rebel’ on drums while Jonas (Fairley) comes out front.

You're something of a workaholic - covers and originals bands in Canada and still performing with them when you go home - how do you find the time?

I like to play with different people and have developed great friendships in the musicians back home. To play music with them feels like a family reunion. As far as being a workaholic, I bet my gal Denise would beg to differ...lol

How has it been being on the road with the legend Jake E Lee?

Jake E Lee is probably the kindest, most well rounded musician I’ve ever met, always thinks of others and stays true to himself, which I find very admirable. He would give his last dollar, a very kind soul and a great friend!

I know you can be a little, er....'wild' at times - although I guess after Ozzy you're a breeze to Jake?

Oh yeah, I play by the rules and I don’t drink much while we play shows. I used to do that in clubs so I could tolerate the drunks around me, no need for that anymore and I really get off being in total control while onstage.

You've just performed on the Monsters of Rock Cruise and at Frontiers Rock Festival in Italy - how did they go for you?

We had a great time and I thought we played very well at those festivals. We are a fairly new band and we are feeling like a band these days - I love the bigger shows.

Do you think you've finally shaken off the stigma of the first gig with RDC, which was widely criticized?

I've been telling everyone for years just how talented you are - does the feedback you've been getting from people who've seen RDC spur you on?

Absolutely! I’ve been in the game a long time, yet I manage to keep refreshing myself, which is tough to do in this biz. I’m a very lucky man and have some of the best people in the world on my side

You're playing two massive festivals in the next few weeks - first is Sweden Rock which Ozzy is playing at. Do you think you'll get a chance to meet him?

I doubt it as we are on Friday then have to catch a plane right after, but you never know.

Do you think Jake would be invited on stage with him.....and would he go?

I think he might, not sure what will happen that day, but I’ll keep you in the loop..lol

After Sweden Rock is the prestigious Download festival. You're on the same stage as Aerosmith. Are you looking forward to that and your other upcoming UK dates?

Yes its going to be epic, would love to shake the hand of Steve Tyler. We treat every show as important as the rest, we love playing together. Also, I have hundreds of relatives scattered all over England, so I will get to see them and my girl flies out on June 5th with our son as well, so hell yeah!

Do you think there will ever be another Harem Scarem tour?

I never say never, I’ve been friends with the Scarem boys most of my professional life and I love them dearly. If I’m able and they need me, I’ll whack the tubs for them any time!

Well, here’s hoping the UK tour is a success for Red Dragon Cartel and with such great musicians (the band also includes the amazing Ron Mancuso from Beggars & Thieves on bass), and kick ass songs, I’m sure it will be! 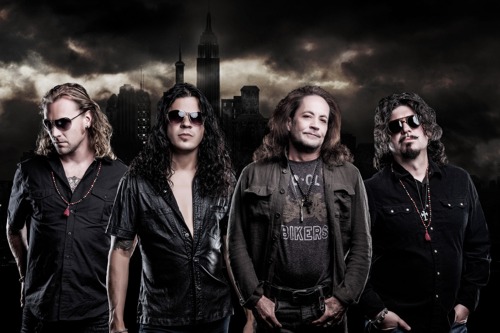