Year of the wolf! An interview with BlackWolf frontman Scott Sharp.

One of the best discoveries of 2014, Bristol's Hard Rocking BlackWolf were defiantly howling at the top of their voices at every turn. Tours with Winger, Blues Pills, The Answer and The Brew (amongst others), saw this hard working outfit spread their message far and wide. While with 'The Hunt' they provided a stunning statement that was undoubtedly the debut album of the year. An early member of The Pack, Rocktopia's Steven Reid, spoke with singer Scott Sharp to look back on a momentous year for this young act and to discover what 2015 holds in store for a band destined for ever greater things.

Scott, casting my mind back to the first time I saw BlackWolf on stage, supporting The Union in Glasgow's Cathouse, I remember being really impressed with you guys. However with everything that's happened to the band since, that feels like aeons ago. Can you believe how things have come together since then?

Thanks, it really does seem a long time ago now. It's strange, because on the one hand we've always been determined to create opportunities for ourselves, but we're underdogs to the core and we still maintain that sort of mindset, I think. So, even though success did start gathering our way we were really surprised and shocked by it all.

At that stage you only had your debut EP 'Taking Root' available. Were you surprised by how much notice that release managed to gain for the band?

Absolutely, that EP really just started life as a demo, but it gathered momentum so we went with it. Again we were really surprised by the feedback. 'Taking Root' gave us our first proper foothold, which then actually led to that tour with The Union.

And from there it's been a whirlwind of touring, recording, touring, promotion, touring and festivals! Have you actually had the time to take a step back, assess everything that the band have achieved and where you'd like 2015 to take you?

To be honest it never really came to us until very recently. In December we made a short montage film to say thanks to everyone that's been supporting us, and that's when it really hit us. Compiling everything like that caused us to really look up for the first time. You can get telescoped at times and it's easy to miss all the good stuff when you're pushing so hard. We still have a huge mountain to climb, but it was amazing to see everything we've achieved in such a short amount of time.

During that time you've played live with The Union, Blues Pills, Winger, The Answer and amongst many others, The Brew. That's an eclectic, impressive list. How has your music gone down with such a variety of audiences?

We've been very fortunate in the sense that people have taken to us amazingly well. We believe in doing our own thing and we just put all our energy into making that translate to every audience we play for. I think people dig that, and it helps them relate to what it is we're doing. The important thing for us is to make that connection, once that's done you're all sharing the same wavelength.

And you also played festivals such as Steelhouse last year as well. How did you find that sort of occasion compared to a small intimate gig?

The bigger stages are fantastic and they definitely give us more room to run around and dance about on which we love, but nothing beats the energy of being inches away from an audience you're really connecting to...it's a difficult one.

Over the years the UK has produced countless Heavy Rock bands who've arrived on the scene with great fanfare only to fall away before they really got started. So it was key for you guys to hit the ground running with your debut album proper, 'The Hunt'. Did you feel any pressure to deliver as you were putting the album together?

Not at all in that sense. For us the only real concern at that point was making sure we produced a record that the people who were paying for it really loved. That was the only real pressure for us then. Now though that sort of feeling has definitely kicked in and we're mindful of it.

To help raise funds for that album you used the increasingly popular Pledge system. As a new, at the time, relatively unknown outfit, did you see that as a risk back then?

It was a big risk for us and truthfully we weren't sure we could reach our target, but the support was unreal. It was an amazing experience because it was the first time we realised the level of support there was out there for us.

So tell us about the recording of 'The Hunt'...

Jeff Rose, who produced the album, is a legend. He's a fantastic guy and he has a great ear, not only that, he knew where we were coming from straight away and that's really important. All the songs were written before we hit the studio, so it was no more difficult than it should be, although you should always push yourself to grow. Some of the songs did shift and evolve a bit as we recorded them and most of the songs we write continue with this sort of shift long after they're recorded. It's important for us that the music is breathing; every tour we do, the songs grow or shift and take on some new dynamic that we didn't see there before. They keep breathing.

The album rightly received rave reviews. With hindsight, how do you view your first, full length step into the world of Rock n Roll?

We're very proud of 'The Hunt' and it was a really important moment for us. It's opened up a lot of doors. I'm a perfectionist and I will always find things we could've done better or different, but it was the right record at the right moment for us and the support it got has really encouraged us to grow further.

Which leads us to your recent single release, 'Kiss The Fire', which again has been well received. The song obviously feels strongly linked to 'The Hunt' and yet it also feels like an extension of the band's sound. Was that the intention?

Absolutely. We're always looking to grow and refine what it is we do, and you're right 'Kiss The Fire' is very much linked to 'The Hunt' in its approach. We started writing that shortly after the 'The Hunt' was released. The purpose of that song was to act like a stepping stone for us. It was a chance to explore new ideas about where our sound could go and how we could not only push it further, but distill it to what we felt were its most important elements at the time. It's been a bridge for us that's lead to what we're writing .

So work has begun on album number two?

Yeah, it's really exciting for us right now. We're only in the very early stages of writing at the moment and we're planning to take our time with this record, but were having an absolute blast with it at the moment. Like I've said, the focus for us right now is to refine what we do. We also really want to raise the bar on what we've done previously and so far we're very happy with how it's going.

And what else can you tell us about the album? Do you have a name for it yet? A prospected release date? A producer lined up?

There's no working title for the new album yet as we're quite early in the process, but we're hoping to be in the studio recording before the end of summer. At the moment we're aiming for a fall release. As far as producers go we've just started working with Toby Jepson for the initial pre-production stage and it's going fantastic. Toby's very easy to work with and he's really helping us hone the songs and our sound.

Will you be utilising Pledge again, or are you heading in a different direction funding wise this time?

We will be using a crowd funding format again this time round, but it won't necessarily be for the album as such. At the moment we're aiming to offer an exclusive bonus EP release of new songs alongside the next album, and this will only be available to those that pledge. The EP will go with some other great goodies we're putting together with it which we'll have more information on very soon.

Yep, that's it. Our writing schedule is pretty busy at the minute but we've managed to squeeze a few live dates in amongst everything. We'll be heading out with The Von Hertzen Brothers this April, supporting them on their three UK dates and we will then have our second run of headline dates coming up after that in June, which we can't wait for.

And finally, the band were recently nominated in the 'Best New Band' category in Classic Rock's 2014 role of honour. That feels like the perfect way to sum up what has been a spectacular couple of years! You must be delighted?!!

It completely blew us away, we didn't even know anything about it until it was announced so it was a real nice surprise! Classic Rock have been great to us and have given us a lot of support over the last year, alongside yourselves, so it was awesome to get that nod from them. It meant a lot. It's definitely been a crazy two years and we can't wait to see what this one turns out like. 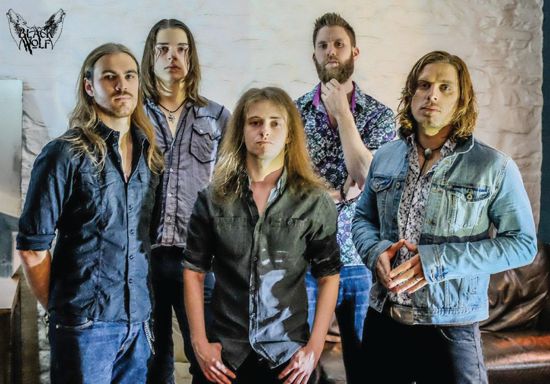