An interview with SANTA CRUZ

They're back – even wilder than before and always ready to party! The new self-titled Santa Cruz album that's seeing the light of day in early March is ten killer hard rock anthems with a modern edge, but also a distinct Mötley Crüe/Skid Row vibe to it. No wonder it triggered quite a discussion between the band members Archie, Johnny and Middy and Alexandra Mrozowska, the other topics covered being also rock'n'roll debauchery, music videos and Santa Cruz's future plans.

What are your personal highlights of the new self-titled album? Do you think it's a step forward for the band?

A: I think the biggest achievement is finding our own sound with the album. Where as SFA was more of an un original, even though I love it, this is really the one that sounds like no one else. I think that is the turning point in every musician's career, finding their own voice! There's things musically on this album that I think have never been done before, so I´m really proud of that.
J: Yeah, we totally found our own voice and sound on this one, though it was a long and hard process. But everytime we were in the studio thinking "should we do this like that?" with a new different kind of idea, the answer always was "Of course!"
M: I'm pretty proud that we basically made the whole album by ourselves. There was no one in the studio telling us what to do and what not to do which made it special.

Was the musical and lyrical inspiration any different than before?

A: Yes, totally. The lyrics on this one are more personal and in-depth than SFA. We've grown a bit older, got some more scars and bruises and you can really hear that on this one. I really threw myself in to the process when we recorded the vocals. So there's genuine emotion behind every song. Musically we went for a more heavy and fresh sound. I think we realised that we can step out of the box of expectations and take our sound anywhere we like without limitations!

What are your favourite songs off the newly released album and why?

J: I would say probably – all the songs! It changes time to time, but now my personal favourites are 'Velvet Rope', 'Bye Bye Babylon' and '6(66) Feet Under'. I just love the riff on 'Velvet Rope' that's so fucking heavy and groovy, 'Bye Bye Babylon' is mid-tempo song, but it has this dreamy kind of feel on the chorus which is enchanting. And '6(66) Feet Under' has this rap kinda verses which are very groovy like the riff and the chorus!
A: 'We Are The Ones To Fall' is my favourite 'cause it sets the tone for the whole album to come... but right now my favourites to listen are 'Bye Bye Babylon', 'Bonafide Heroes' and 'Velvet Rope'!
M: Now that we've played the new songs live on this current European tour I fell in love with 'Let Them Burn'. It's a perfect live song that just screams for big towers of flame on stage. Also one of my favourites on the album is 'Can You Feel The Rain', it's a song that you listen when you walk through a city that sleeps and you see the sun rising again in the horizon.

The new album spawned four singles. The video to one of them, 'Wasted & Wounded' depicts the so-called rock'n'roll lifestyle. Is it something you guys know from your own experience?

A: We wouldn't sing about anything we don't really know about! I think the whole "sex, drugs and rock'n'roll" thing just sounds stupid if put like that. To me, it's more about creating your own rules, being a rebel against authority and establishment, and enjoying the one life you have to the fullest!

The other video – 'We Are The Ones To Fall' – is different, quite dark and bloody. What's the idea behind it?

A: I proposed that we'd make our own version of 'Fight Club', even with the "hit me as hard as you can" scene. We proposed the idea to the director Ville Juurikkala and stripped it down a bit to the level it came out as.
J: First we came up with an idea to make like a 'Terminator'-style video with post-apocalypse kind of feel to it, but we didn't have enough money... We all love movies, so we wanted to make something close to a movie. Idea came from the movie 'Fight Club' – we actually thought recreating one of the scenes from that movie in the video.

The album cover somewhat resembles the famous Four Signs formula of Led Zeppelin's fourth untitled album. What was the actual idea and design?

J: Archie came up with idea to have symbols on the cover of "We Are The Ones To Fall" - 7" Single. I drew two of those and the other two, hexagram and chaos symbol were already ready. We never thought to use them as a personal symbols like Led Zeppelin, but they got stuck on every single cover and finally on the album cover.
A: Yeah when we we're planning the 'We Are The Ones To Fall' single, I thought four symbols would look cool in the cover. I made a sketch of it with my iPad with some random symbols on it, then we found the final ones.

What do the particular emblems on the cover stand for?

A: The symbol of chaos stands for creating our own rules, and not kneeling in front of the standards society has set for you, Hexagram stands for standing up for what we believe in, the voodoo symbol stands for the spiritual things around us tha you cannot see and reverse all-seeing eye means that we can take over the leaders and make a difference.
J: The album cover is a picture of our rehearsal place wall, I though it looked pretty cool and then I added the skull drawing and the symbols on the cover. It looks like a statement : "This is Santa Cruz".

Starting from the 17 of March, you're going to play a string of UK dates with Amaranthe. Any expectations? Any other plans related to touring?

J: The UK has always been great place to play for us, I hope there's loads of Santa Cruz fans attending the shows – and that we could steal a few more! We are also going to do an US tour in May, then summer festivals, hopefully another European tour and US tour in fall, then a Finnish tour, and early next year headline UK tour. We will also probably do few more videos from the album, but I can't tell which songs.

How do you see the band's future in ten years from now?

Archie: I hope we're doing major headlining tours in the US and around the world. We've put out five albums out, and it would be cool to have a platinum album. We're working on our 6th, which is gonna take many years to work on, but when it comes out, it'll be hailed as the best rock album of the new millenium! 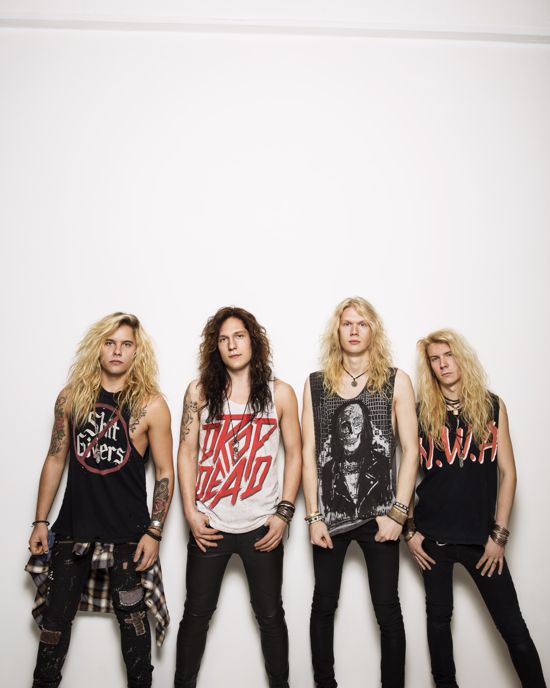