Interview with House Of X

An interview with House Of X

Comprised of names every hard rock fan is certainly familiar with, House Of X is a band we should certainly keep on our radar. Not only because of its members collective resume reaches back to bands such as UFO, Phil Lynott's Grand Slam, Wild Horses, Lionheart or MSG – but also because of the excellence of their debut self-titled album which Alexandra Mrozowska discussed in detail with the band's drummer Clive Edwards.

I believe House Of X originally started under a bit different moniker and with the idea of performing cover songs. Could you tell us more about the circumstances that led you to where are you now?

Yes it started as X-UFO, I was talking to Danny on the phone one evening and we were saying how much we enjoyed playing all the classic UFO songs, many of which we had written, and wouldn't it be great to put a band together. As for the name we agreed that anything we used would automatically have ex-UFO all over it so we decided to be totally vulgar and call it X-UFO. From when we started that eventually we would write new songs and at that point change the name accordingly. We are all writers so it made sense.

How long did it take to record 'House Of X' and are you satisfied with the results? What do you think are the highlights?

It was done over three main sessions – the first song was 'Busted'. We wanted to put a new song in the set so we had 1 day at a studio in Croydon, the next session we did four songs in 2 x days at a studio on an Island on the Thames, then we did the bulk of about seven songs in another 4 x days on the Island. We overdubbed at another studio for a couple of days and job done. As for highlights, for me it's the diversity of songs but still keeping the X character in each. Laurence's guitar playing is always a highlight for me too.

The first association with your music is, of course, UFO and perhaps the early MSG. What were your actual inspirations during the song writing and recording process?

We write what we feel is fun and good to play for us, what works, everything we have done in our careers has been done like that, so no "let's write a song like that one". Sometimes you get a riff or line that jumps in your head, 'Busted' stems back to a night out with some Swedish chums, 'Road Less Troubled' was Danny having a bad day on the trains, others we just start with a blank sheet and doodle on something, then work it up.

The sound of 'House Of X' is surprisingly modern at times. Are there any contemporary bands you're particularly inspired with?

No not really, it's just how we feel things should be played by us now, there are loads of good young bands out there, but we just do our own thing.

Yet about UFO, your rendition of 'Martian Landscape' is heavy and sinister, with progressive influences. What's prompted the choice of re-recording the song and what's influenced the change in its sound?

Well Danny who had written it originally had said many times how he loved the song and would like to do it, it was my idea to do it like that, just seemed to make more sense move it from the light '70s pop feel to the heavy-as-metal version.

Why have you decided to include an instrumental track ('Rage') on the album?

Well why not, they were common years ago, it is a great track and one where Loz can really show off, and the change of feel at the end is a lot of fun to play.

Songs on your album – with the obvious exception of 'Martial Landscape' are credited to the entire band. How does a song writing process look like?

Well it normally starts with someone saying "I've got an idea what do you think of this" which is followed by a either a chorus of "Rubbish" or it goes into the X machine of arrangements, re-working and words etc. I think you can tell by the diversity of songs that no one person has dominated the writing, it really is a band creation.

Starting out as a live band basically, do you think this fact helped you transform the energy into the recording studio and capture it on the album?

Yes in some ways, although we hadn't played many of the songs live before we recorded them, we had got a very energetic live set together that we always put into our performances either on stage or in the studio.

There's a certain super-group quality to House Of X – and super-groups don't last, they say. How do you think things are going to work out with this band?

Well, we have been arguing and fighting together for a few years now so who knows... A band that argues together sticks together – that's my motto! (laughs)

This "super-group quality" also involves all the experience you've gained throughout the years in various bands. Do you think it is reflected in the sound and style of House Of X?

Yes it must do, we don't consciously try and sound like someone from our past, but we all have our own style, so it will sound like us when we were with so and so, it shows that we have always played the music we love.

Labelled as the "British hard rock sound", where do you think the difference between the British and the American rock music comes from? Is it a matter of different inspirations, or perhaps some other factors?

I think that's a fair point, they do have different inspirations musically, not totally, we both love a lot of the same bands, I think showbiz counts a lot for them more than us, nothing wrong with showbiz by the way. But there are other factors that shape an artist, growing up in Texas is not the same as London, and so on... I think being a larger geographic area it makes for a difference, we are more condensed.

2014 brought you a handful of concert dates throughout Europe. Is there any gig you remember particularly fondly?

Could not pick one as it would not be fair, they were all great fun, Germany and Spain were brilliant, it was for the really nice people we met on our travels, the promoters and fans alike were so good to us, we had some great times.

What are the band's current plans?

Well, we are looking to get back out on stage as soon as possible... no long tours, but we hope to try and hit as many towns as we can. Would love to do a big festival this year as I know we would do well as we can rock with the best of them. I'd also like to thank here everyone who came to a show or bought the album. Many thanks to people who go out and support rock and metal – you keep us all going! 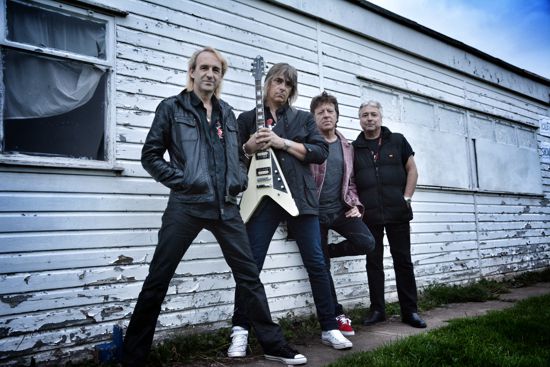