H.e.a.t - An interview with Erik Grönwall and Crash

A few hours after their phenomenal appearance at Download, yours truly met up with the singer and drummer to have a brief chat about that experience and their forthcoming plans.

Crash: It was great. Maybe the expectations were quite low because we were playing a very short set and early on, and the weather is always uncertain in the UK, but we had a great time, a killer set and a huge crowd, the weather was great too. Everything was awesome.

Erik: We felt like we wanted to play longer, 25 minutes is not enough.

Everyone there wanted you to play longer! The Dead Daisies, with John Corabi, Marco Mendoza, et al, were opening that stage and you played after them. How does that make you feel?

E: It feels really good. It felt like we've accomplished something.

Any plans to come back to Download next year?

E: I don't know. I think we're going to focus on writing songs and get a new album going. We are playing Japan in September so after that we are going to start writing songs. We are not in a hurry to release anything new.

But isn't it about time? The last studio album, 'Tearing Down The Walls' was released in April 2014, with the 'Live In London' album following in February 2015. I know you are quite prolific song writers.

C: We have learned throughout the years that we have to keep on writing all the time.

Do you have any songs ready for the new album?

C: No, we don't even have demos, just voice memos on our phones, but we will focus on the writing and when we feel like we have enough songs and ready, then we'll go in the studio.

Can we expect material in the same vein as what you've been doing up to now?

C: We can't really say but we are going to write exactly what we want to write, it's going to be a spontaneous album and put in whatever we think sounds cool at that moment.

No pressure from the record label or management?

C: No, we've been doing this for too long to have pressure.

How was Sweden Rock?

E: It was great. We played after Mötley Crüe. We were on stage at midnight and it was crazy. There were a lot of people.

C: We also recorded the song 'Inferno' for a live video, which will hopefully be out soon.

Next month (17 July) you play Väsby Rock Festival in Sweden. Last year guitarist Eric Rivers got onstage to play with Europe. Are you expecting any kind of favours in return?

E: We should ask Norum to join in with us. That would be cool. I think it is up to Rivers to ask the question.

Tell us more about your forthcoming trip to Japan.

E: I am going there for four days, but the other guys are staying a little longer for a vacation. The record label invited us over to do a promotion show. So that is one show and then back, but it's going to be fun.

Will the next tour be when the next album is out?

E: Exactly. We'll probably play some festivals here and there but the next long tour will be when the next album is out.

Can you see an increase in number of people attending the H.e.a.t shows from the day you joined the band up to now?

E: Oh, yes. It feels like we're growing constantly. Playing here at Download is really good for the band and it feels great to play live.

Next time, I want to see you headlining if not the main stage, the second one. 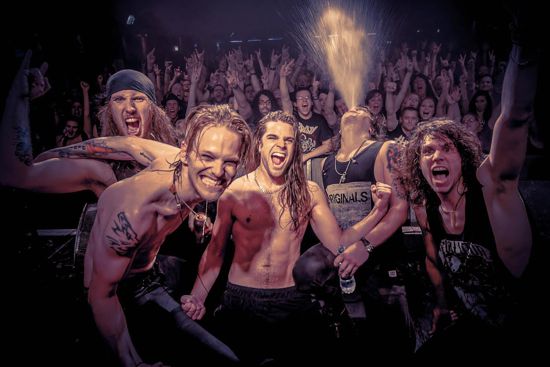