With Classic Rockers New England very much on the run again. Drummer Hirsh Gardner broke off from preparations for the upcoming US and Japanese dates and impending new live album to talk with me about all that's going on in the New England Nation, their plans for the future as well as their far reaching legacy, and his solo material too.

Listening to the new live album, the band sound as tight as ever. How easy was it to slip back into the groove with the other guys?

It was quite easy. You know our last gig together was around 1982. It was, I think, 2006 before we hit the stage again. We rehearsed for three days and it was like magic...never sounded better. I think I can attribute that to how much we actually played from 1977 til we disbanded in '82. It was really nonstop. We all read each other very well and the calibre of musicianship speaks for itself...so yeah, it slips into the groove pretty easily.

New England is once more, very much a going concern, what, if any, are the plans for after the album release/tour?

I think quite good. We really are most creative as a team and unfortunately we're spread all over the country so it's difficult to get that creative ball rolling. I remember in the past at the old Braintree rehearsal studio John would bring in a song idea and we'd bang it out. AND, we usually had two or three ideas going on at the same time. It was a tremendously creative time.

I have to say, the band sound better than ever, do you think like a good wine, you've all improved with age?

Absolutely! You know that first rehearsal back in 2006; at the end of the first song we all looked at each other in amazement at how good it sounded after all those years. Once again, I'm playing with 3 of the most incredibly talented musicians who have spent a lifetime at their craft...yeah; we're like a fine wine!!!

You've been closely involved with the production/mixing of the new album, any particular challenges that needed to be overcome?

Firstly, the playing was amazing. It was a joy to crank up the tracks and listen to everyone's parts. The goal mixing this was just to make it sound like a live band. Some of the tracks were direct into the board so building that live Regent Theatre room sound was fun. We had a couple room mics that were pretty muddy sounding...didn't use those but it gave me a nice idea of how the room sounded. I used some cool digital reverbs to emulate the room.

I know that you have also been working up some solo material, how is that going, and are there any plans to get something released?

Yes, I actually was in the middle of production when we got the record deals to release Live at the Regent so I put the solo project on hold and jumped right into mixing the live stuff. We'll get through the New England tour and then jump back on the solo train. There are a few things up on the www.hirshgardner.com web site for your enjoyment...check 'em out.

The new live album included, has as a bonus, the studio track 'I Know There's Something Here', with new material as good as this, surely a new album is on the cards.

I think the best opportunity for new material will be as we rehearse for the upcoming shows. John and I have blocked out time in October for rehearsing the live show and perhaps we'll develop some ideas there.

With all 4 members dotted around The States, it must be difficult to get together , ever considered sending material via email to get things done, or are you and the rest of the band 'Old School' in that you need to be in the same room as one another?

There are so many ways now-a-days to record music. Sure we could send files, we all have studios...but like I said earlier I think our best results are when we are together bouncing ideas off each other. New England is a great live band. "I Know there's Something Here" came to be from a live jam. So the hope is that some of those ideas will come up in the near future. When we set up in LA to rehearse for the LA and Japan shows we'll be in recording studio so maybe some ideas will get on tape at that point.

It must be gratifying to know that after all these years, New England are, rightly, remembered as one of the leading lights of the Melodic/Hard Rock scene from those heady days of the late70s/early 80s. Any thoughts on this?

For me it's always been bitter sweet. We worked so hard back in the day to "make it". And when I say make it, I mean that our goal was to gain enough success so that we could sustain ourselves and go on creating great music together. I guess to that end, that represents the bitter. The sweet is that ALL of us have continued to make music in our lives and have done quite well with it. Now to come full circle and be playing New England songs again, and playing with John, Jimmy and Gary...damn it doesn't get any better than that. So, gratifying?? Hell yeah!!!

Do you have an opinion as to why it didn't quite work out for New England first time around? Speaking with John recently he mentioned management/record label issues etc, what do remember of those times?

I think it was the record labels at that time. They really dropped the ball. Infinity was mismanaged into bankruptcy, Elektra was a mess and couldn't get our records to cities where we were playing...our management company were forced to ignore us, and the sound of music was changing. Punk music was taking over the airwaves and there was really no interest in a classic rock/prog band like New England. But hey, here we are still playing great music together in spite of all that!!!

Do you have a particular favourite memory from those times, touring with the likes of KISS, Journey etc?

I like to remember the relationships that we developed with all the other musicians that we played with. To this day I'll bump into many of the people in bands like Cheap Trick, Journey, REO Speedwagon, KISS and others and we'll have that mutual respect for each other. Makes you feel that 'Yes, we made our mark'. Interesting story that I heard from Bumblefoot...I guess he was jamming on 'Don't Ever Wanna Lose Ya' when Zakk Wilde came into his dressing room. Wilde says, "Hey, I know that song!" So the two had a mutual NEW ENGLAND moment. I think that's pretty damn cool!!!

There are some fine AOR/Melodic bands around right now such as 'Cats In Space' that openly acknowledge the band as an influence, what do you think of the current rock scene?

Cats In Space are amazing. Love their music and have great respect for them. And, I am humbled that they acknowledge New England as an influence. Listen, there is amazing music being written and produced everyday by a myriad of artists, be it pop, rock, metal, prog, hip hop or whatever. If I hear a song with a great groove, great melody, great production...I'm in!!!

Finally I couldn't go without asking, what are the chances of getting New England over here to the UK?

Yes, we are looking into it as we speak. If I may say so, please go out and support artists that you love to listen to. When we release something go to the website and make a purchase. Get that CD, T-shirt and support the band when they play a gig near your hometown. Our fans are our main resource to continue making music and touring and we really need your help. I'll write as many thank you letters and hang out with you at our meet and greets as is humanly possible. Like John says at the end of every concert..."We love you New England Nation and we Don't Ever Wanna Lose Ya!!! See you all on the road... 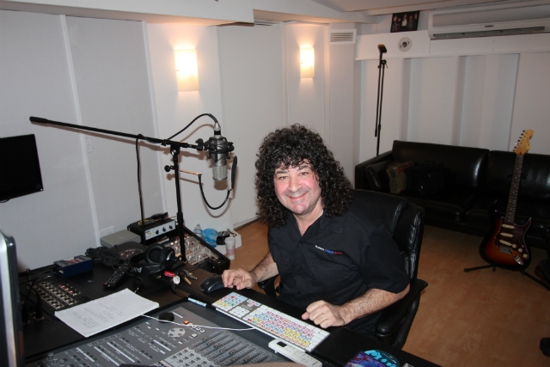