Before we delve into this amazing gig, it should be pointed out that Paul Hume (of Demon fame!) has done a wonderful job in making Eleven in Stoke On Trent one of the best venues around. Sound, lighting and overall setup is great from both performer and audience perspectives – kudos to you sir!

Starting off the night were Birmingham-based Redline, who are Martina Edoff's support for the whole tour. The boys launched straight into 'Some Kinda' Mean' and commenced delivery of their brand of hard hitting no nonsense Heavy Rock. More dual guitar deep riffery followed in the shape of 'Black Sky' from the 'Vice' album. The intro to 'The Edge Of Falling' sounded more like start of Van Halen's 'Ain't Talking' Bout Love' than the album version of this song as the heavy control was once more set to max. At this point, the stage smoke had built to such a degree lead singer Kez Taylor quipped "Are there many in? I can't see bugger all up here!" Having ripped through 'Empires', the band dived into perhaps their most famous song 'King Of The Mountain', which became synonymous with the Isle Of Man TT races a few years back. They opted to finish their set with the appropriate 'We Came To Rock' and the band certainly revved to the Redline tonight, and whilst they may not be the most animated act visually, they more than made up for that with great Heavy Rock delivered as a big wall of sound which demanded attention.

Making a triumphant arrival on stage, the svelte and always stunning Martina Edoff was clearly happy to be here judging by the huge smile on her face. As she kicked off with 'Turn Our Pages' (from her new album, 'We Will Align'), the moment Edoff's distinctive, powerful vocal delivered the first line, it was clear that she sounded even better live than on her already stupendous studio outings, and that meant tonight was going to be truly special. The heavier but still intensely melodic 'Alive', again from the new album, followed. Then the high energy 'We Are The Champions' with its positive message had both the band and the audience bouncing. 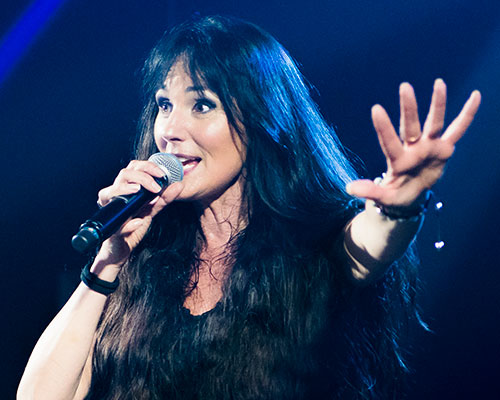 Edoff has reached that musical nirvana of having a vocal delivery and tone that's world class as well as one of the finest guitar and rhythm sections around. Perhaps that is why Edoff with her long flowing dark locks, appeared so calm and confident, whilst the performance seemed effortless. One thing is for sure, her stage presence meant every single person in the crowd was focused totally on that stage.

Drawing next from her previous studio release came 'Unity'. This was full of melodies, hooks and sweet guitar solos – pure AOR class! Equally brilliant, but at a slower pace, was the hauntingly beautiful ballad 'Face The Mirror'. Guitar maestro Stefan Bergström was next to weave a spell on the audience with some exquisite bluesy soloing ahead of 'Invincible'. With a classic old-school Heavy Rock vibe with an apt message in today's climate was 'Lay Down Your Arms' which saw Edoff's powerhouse voice push boundaries with great style once more. 'Truth Came Knocking' and the catchy 'Set You Free' swiftly followed before we were hit with the silken gloved set ending punch of 'Worlds Gone Mad' – things don't get much better than this! Edoff then returned to perform an encore of 'Come Alive' replete with a show closing scream that Ian Gillan would have been proud of!

Edoff is not as well known in the UK as she is in Europe and indeed in the USA. That is a shame as she has so much to offer and easily sits up there with the greats like Robin Beck, Cher and Pat Benatar in this genre, but what sets her apart is her humility and down to earth attitude both on and off stage. Martina Edoff is a gem that should be allowed to shine!