Kobra And The Lotus / Brutai / Dendera

Having attended the first night of the tour in Southampton a week and a half earlier, I had spent those following ten days thoroughly looking forward to the chance to experience it all over again. The last night of the tour in London also had the added bonus of a third support band that I was also a fan of and knew well.

I arrived at the venue early, I secured my anticipated spot down at the front and awaited the evening to start. More or less on time, Dendera strolled out and from their main opening track 'Awakening' through to their closer 'Disillusioned' they were as entertaining as ever. Their set was full of the expected fiery twin guitar riffing from Stephan Main and David Stanton, the thundering rhythms of bassist Bradley Edison and drummer Andy Finch which were all topped off by the air raid siren vocals of Ashley Edison. They once again proved they are a superb and perfect opening/warm up band (and may I add they are just as entertaining as headliners) as Ashley Edison constant encouraged the crowd to get involved right from the off with plenty of requests for cheers, screams and general involvement. The sound wasn't the best I had heard from the band due to the fact Ashley Edison's vocals were a touch low in the mix (from where I was stood anyway), but his ever-impressive Bruce Dickinson-like screams were still thankfully very audible. In fact, he was in particularly fine form, to such an extent that the lady next to me was so impressed that at one point she mouthed "fucking hell" with her eyes wide open during one of his extended wails. Although the set was only a short one, it was an excellent opening to the night and those in attendance seemed to really appreciate what they heard. If you have yet to see Dendera, I do encourage you to check them if you get the chance as I consider them to be one the UK's best up and coming Heavy Metal bands.

Following Dendera's Classic Metal with a Modern edge, the next band on the bill were Modern Progressive Metallers Brutai who had been the main support for the whole tour. Sound wise they were quite different to Kobra And The Lotus (and Dendera) and I think it's worth highlighting that the headliners deserve some credit for selecting a band somewhat different from themselves to act as main support for all eleven dates. I would also be only fair for me to admit up front that Prog Metal isn't one of my biggest loves when it comes to Rock and Metal music. Brutai had suffered from their own somewhat poor sound in Southampton which especially affected the vocals of singer/guitarist Felix Lawrie and keyboardist Alex Lorimer. Thankfully, in London the sound was better all round and not only were the vocals clearer but the overall sound was as well. I wasn't able to get a set-list for their slot, but I can tell you the set was full of heavy Progressive Metal with pounding bass and drums, lots of varied and extended guitar work from Lawrie and Henry Ryan as well as Lawrie's mixture of clean and grunted vocals. Parts of their set was pretty heavy indeed and there was also lots of lengthy passages of instrumental work which was quite impressive and certainly more enjoyable with everything having clearer separation sound-wise than when I had seen them ten days earlier. They certainly had their fans in the audience and seemed to go down well with the growing crowd. If I have one criticism it would be that while they were very appreciative of the audience's response, they didn't offer too much encouragement in terms of audience interaction (unlike Dendera). Overall, although they didn't really suit me taste/genre wise, one couldn't help but be impressed by the technical ability on display from each member of the band. If your tastes lean more towards (heavy) Progressive Metal than my own, I would certainly recommend investigating them.

At around nine it was time for the main event. With just drummer Marcus Lee on stage, the opening intro to 'Gotham' fired up and the band appeared piece by piece as bassist Brad Kennedy and guitarist Jasio Kulakowski and Andrea Martongelli (Arthemis, who filled in as second guitarist for the tour) joined him on stage. As the song erupted in full, Kobra Paige appeared like a whirlwind and the show was off and running. They followed up 'Gotham' with another two songs from the new album in 'Triggerpulse' and 'Specimen X (The Mortal Chamber)', the latter being one of my favourites from the new album and it was an absolute belter when played live. 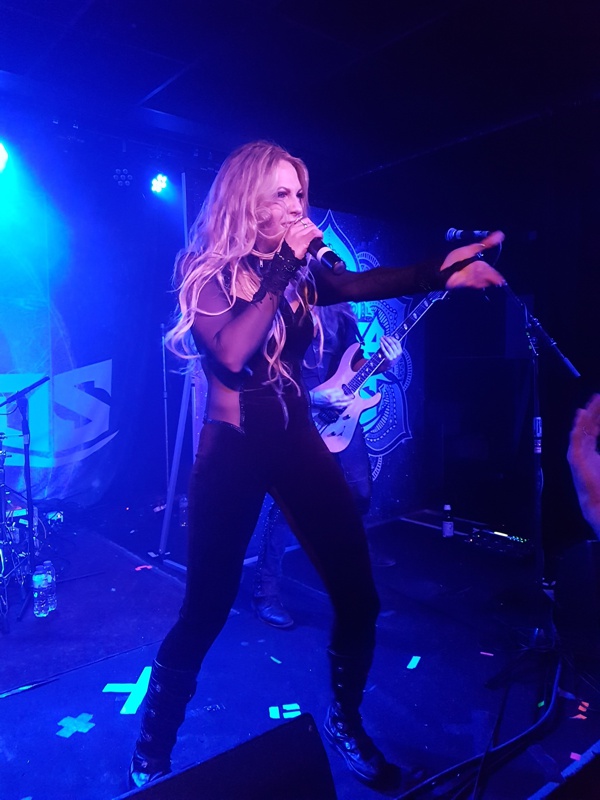 As had been the case in Southampton, the sound was fantastic for the headliners with every facet clear and audible. Despite playing eleven dates in twelve days, the band were on top form and as is always the case, there was constant interaction from the band and especially Paige with the audience. She was always leaning forward with plenty of eye contact and hand slaps which makes for a real intimate and personal feel. Following the opening trio, there was a couple of cuts from the excellent 'High Priestess' album with 'Hold On' and 'Warhorse' before they returned to their sensational new release and my personal favourite cut 'Light Me Up'. It's a song that really tugs at the emotions with a very important lyrical message and it was certainly one of the highlights of both nights for me. 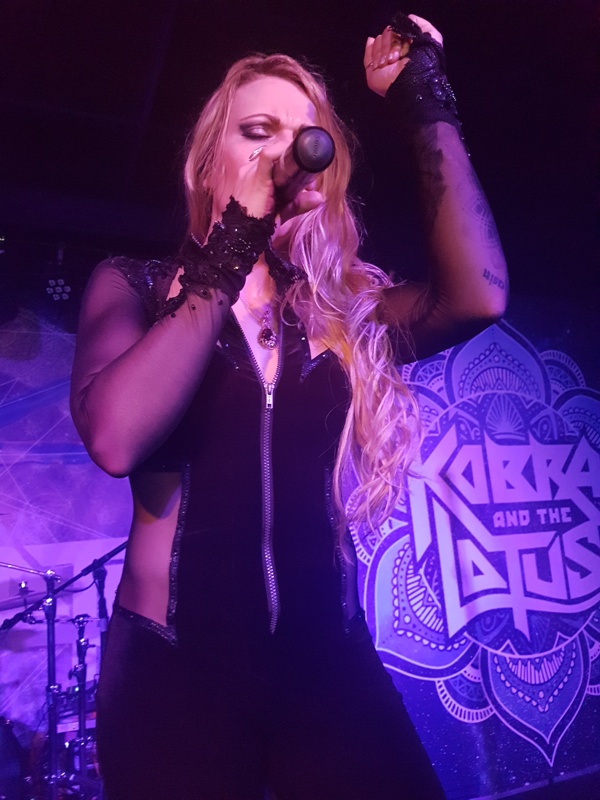 They dipped back into the past again with the popular 'Soldier' before going even further back with the lively 'Forever One'. I'm not usually a fan of drum solos but Lee's moment in the spotlight with short, energetic and enjoyable. Kennedy then took part in a little crowd participation getting various sections of the audience to roar before the group kicked out the fast-paced 'I Am, I Am'. It was then back to the new album for an airing of one of the video singles 'You Don't Know'. The live rendition started slowly and softly as Paige delivered the vocals before the rest of the band turned on the engines and it raceed off as normal; I thought this was a nice touch. Of the remaining four songs, 'Hell On Earth', 'Victim' and the wonderfully received 'Prevail' all came from the new album. In total there was eight songs from the new release and all of them came across fantastically in the live environment; this not only showed how good the songs are but how much confidence the band had in them. 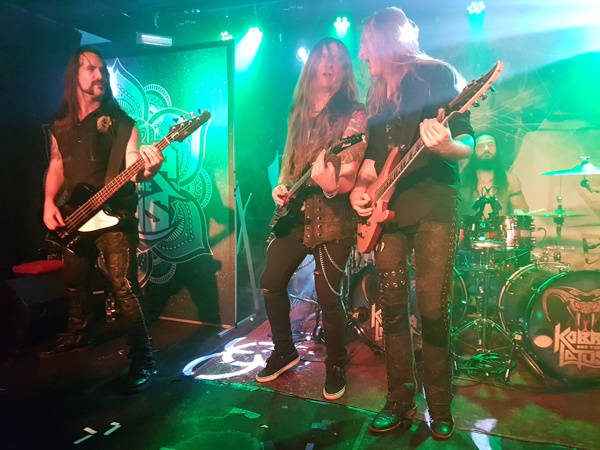 Given I already consider this album to be one of my all-time favourites (my review can be found in 'Fireworks' issue #79), it will come as no surprise that I'm in full agreement with the band's decision to play some many songs from it on tour. During this part, the band members were also introduced and I had the pleasure of my own voice bellowing out the PA as Paige pointed the mic in my direction for Kulakowski's introduction. The band left the stage briefly before they returned to play another personal favourite in 'Heartbeat', before the paced was slowed down for the beautiful 'Lost In The Shadows' (both from 'High Priestess'). Sadly, the last song of the night was all too soon upon us and once again I had the pleasure of the mic in front of me to introduce the galloping '50 Shades Of Evil' which brought another Kobra And The Lotus gig (and tour) to an end.

I may be biased but to me Kobra And The Lotus get better with every album and every tour, and I'm equally happy to admit (as I did in my album review) that they have smashed their way into my all-time favourite bands list. Both this show and the UK tour opener in Southampton were fantastic sets filled with great music and brilliant performances. There's always plenty of "heys", fist pumping and general all-round involvement from the audience at every gig. One of the greatest things about a Kobra And The Lotus concert is that the band always look like they are having a ball on stage and enjoying every moment as much as the crowd. I would also like to add that it was fantastic to see the band come out after the show (both nights) and mingle with the fans, signing things and give everyone who wanted to the chance to meet and chat with them. It's a special touch that means a lot to people and I hope the band continue to do it for as long as is reasonably possibly. 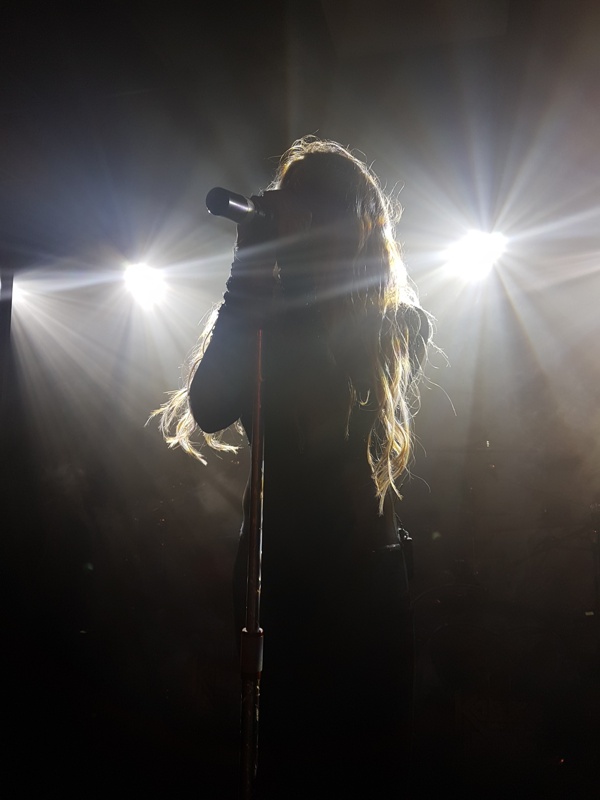 From what I could see, everyone seemed to enjoy tonight (and Southampton for that matter) as much as I did and with such a fabulous performance I'm not surprised. I made a point of reminding myself to enjoy these two somewhat intimate shows as much as possible because I suspect the band will very soon be playing in much bigger venues when they tour the UK. With the second part of 'Prevail' out next year, I think it is safe to assume we will see them back on these shores in the not too distant future and I for one will be there again. If you have yet to see Kobra And The Lotus, make sure you grab a ticket the next time they tour, I am certain you won't regret it.