First impressions of opener Dead Man's Whisky are that they have plenty of big riffs. Singer Nico Rogers has a voice in line with Southern Rock style bands like Black Oak County and Cold Truth, and this is combined with backing that has not only Southern Rock influences but more of an insistent beat and a hint of Punk and Rock 'n' Roll – what's not to like? However, second song 'This Fight' is definitely more "straight down the line" Metal with screams for vocals and a couple more basic Metal numbers do follow. Fortunately, by last song 'Rooster Crows' we are back to the Southern style which was the material I most appreciate from this band and which shows great potential.

Cairo Son also have some Southern Rock influences, reminding me a little of Black Stone Cherry. The vocals are quite melodic at times, but there are Stoner influences and a little bit of Bay Area Doom thrown into the mix too. I occasionally struggle to hear lyrics, although I get the impression the topics are pretty serious in tone. If there's one criticism, it's that I wouldn't mind more of a change of pace in songs, but I have a feeling that if I heard more of this band I might get into what they had on offer.

Diamond Head, who given their importance to Heavy Metal should be playing a far bigger venue in London, stick to mainly material from the early part of their career, however they kick off with newer track 'Shout At The Devil' before giving us great versions of titanic riff-laden and much loved nostalgic classics 'Borrowed Time' and 'Lightning To The Nations'. It's not long then before we delve even further back with 'The Prince' and straight into a mega fast, long and intense solo; Brian Tatler with leg up on the monitor and arm skyward urges the crowd to sing and we get plenty of finger tapping before the drummer gets his head down giving it all.

This is an excellent precursor to crowd favourite 'Heat Of The Night', for which the audience sing so loud that Tatler puts up his arms in a gesture of tribute. The solo is not too fast and simply beautiful, and we get more finger tapping before some classical scales and the ammunition Staccato big finish. Following another newie in 'Set My Soul On Fire' – which has lovely chunky riffs just like the beloved old style and a bluesy solo that's beautiful in tone – we get some super-fast solos running the gamut in great guitar. We're back once again in the mists of time for 'Shoot Out The Lights' and 'Sweet And Innocent' which add a dash of Rock 'n' Roll and slower groove, thus providing plenty of light and shade.

Suddenly we're on the home straight with new track 'Diamonds', which sounds a bit more Sean Harris-like than new vocalist Rasmus Bom Andersen has sounded at times earlier in the set. It ends with Tatler's Flying V held high in triumph before super old track 'It's Electric' which interestingly is very different to Harris' version vocally and finishes with Tatler travelling up and down his whole fret-board before a bass solo. 'Helpless' has a "totally Metal" solo to start with before it settles into more of a military driving machine groove. This first block is topped off with 'Am I Evil?' with its Staccato insistent gun-like riff which sees Viking-like members of the audience suddenly leap forward to the stage for a communal celebratory headbang, and is undoubtedly a climax that everyone present have been waiting for.

The encore is, perhaps surprisingly, 'Sucking My Love' as Diamond Head finish with yet another super old track from their repertoire which (at first) with its sad and soulful solo is a real contrast to the Metal leviathan 'Am I Evil?' Do we miss Harris, undoubtedly! However, is it more than enough to see Tatler still in his prime and for Bom Andersen to allow the legend that is Diamond Head to remain alive, including the delivery of new material very much in the old classic spirit – I certainly think it is. 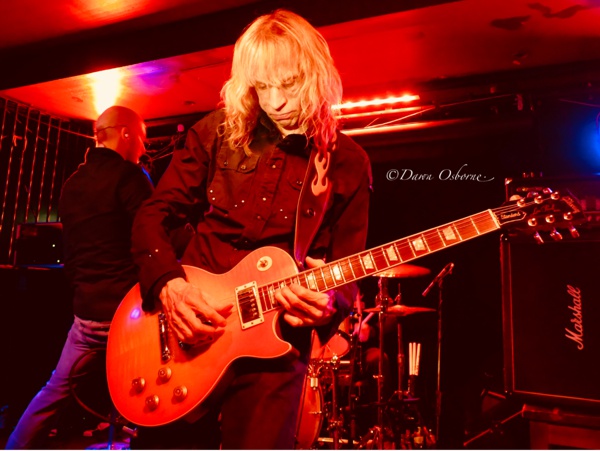